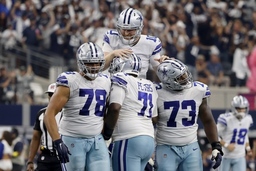 INGLEWOOD, Calif. (AP) The Los Angeles Rams' low-scoring offense has a patchwork offensive line, a tepid running game and few answers for the wave of opposing rushers that has sacked Matthew Stafford 16 times already this season.

Just about the last thing the Super Bowl champs need to see this Sunday is Micah Parsons, DeMarcus Lawrence and the Dallas Cowboys' daunting defense at SoFi Stadium.

"From the back end to the front end, all of it is really impressive on tape," Stafford said. "Got great players, got a really solid scheme, helps those players accentuate what they do well. They've done a great job getting after the passer, affecting the pocket in the games that I've seen. It'll be a big challenge for us, really on all levels."

While Stafford and the Rams (2-2) need a win to bounce back from a Monday night loss at San Francisco, the Cowboys (3-1) can cement their solid start under coach Mike McCarthy with a road win over the defending champions. Dallas' defense is doing most of the work, and it could feast on a Los Angeles offense that could be playing third-stringers at all three interior positions on the offensive line due to injuries.

Those absences have affected everything Sean McVay is trying to do offensively, and Dallas' pass rush presents a foreboding challenge to Stafford's health and the Rams' effectiveness.

"Obviously people are challenging our run defense, because frankly they probably don't want to deal with our pass rush on third-and-5 or more," McCarthy said. "So we've just got to really stay focused on our run defense. I think that's going to be our biggest challenge moving forward. If I was playing against our defense, that's the way I would go."

The Rams might find that difficult: They're 30th in the league with just 68.5 yards rushing per game.

The matchup is a reunion of the first regular-season game ever played in 2020 at SoFi, the multibillion-dollar football palace built by Rams owner Stan Kroenke and championed by Cowboys owner Jerry Jones, whose Legends hospitality company manages the stadium operations.

This rematch also once seemed likely to mark the return of Cowboys quarterback Dak Prescott from a broken right thumb, but Cooper Rush's 3-0 start as his replacement has reduced the urgency for Prescott's comeback. Instead, the Cowboys are expected to face Aaron Donald and Jalen Ramsey with Rush behind center again and the Dallas defense taking the game on its shoulders.

The Rams would fall below .500 for only the second time in McVay's career with a loss. McVay has never had a losing season, and Los Angeles has never been at .500 later than six games into a season during his tenure.

Dallas running back Ezekiel Elliott knows all about the importance of finding Donald, the three-time NFL defensive player of the year, before the snap.

"At running back, definitely always got to know where he is, especially in that pass game," Elliott said. "A lot of times this week, you'll be seeing me checking to make sure he's good before I get out on that route. Like two years ago."

Elliott specifically remembers when Donald "picked me up off the ground and threw me" during the Rams' 20-17 victory at SoFi in 2020.

"Still got the pass off," said the two-time rushing champion, who has a reputation as one of the league's best blocking backs. "It was like a 20-yard gain, so it was a winning moment. But ...".

Cowboys defensive coordinator Dan Quinn and his LA counterpart, Raheem Morris, have been tight since their days together at Hofstra. They coached together with the Falcons from 2015-20 before both landed prominent coordinator jobs that could lead them back to head coaching gigs.

"Dan and Raheem are very close, so it's more process than scheme," McCarthy said of what the Cowboys can learn about the Rams from that connection. "The most important component for this week is understanding the play-calling, sequencing and how he looks at the game."

Quinn also gets a reunion with Rams linebacker Bobby Wagner, one of the stars of the defense he led in Seattle when the Seahawks went to consecutive Super Bowls in 2013-14.

Wagner was the leading tackler for the 2013 team that won the title with defense, dominating Denver in a 43-8 Super Bowl victory. After Seattle's loss to New England the next year, Quinn was hired as Atlanta's head coach.

"Sometimes we talk about, `This is a quarterback who's seen it all.' And so I'd say on the other side of that, that's what you'd expect from Wagner," Quinn said. "He's such a steady and consistent performer that there's just not a lot of things that can fool (him)."

Cooper Kupp is coming off a career-high 14 receptions against the 49ers, and he leads the NFL with 42 catches in four games. Dallas' pass defense has been excellent, allowing just 171 yards per game, but Kupp has produced three monster games (and one quiet outing against Arizona) in his first year after winning the AP's NFL offensive player of the year award.

When asked for the key to stopping Kupp, Quinn replied: "Whoo, man. If there was a key, not a lot of people have unlocked that door."