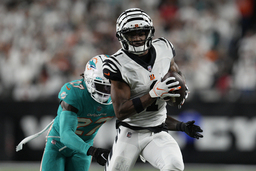 If there was a single moment when the Cincinnati Bengals announced their arrival as contenders last year, it may have been in Week 7 at Baltimore, when Ja'Marr Chase caught a short pass in front of Marlon Humphrey, spun past Chuck Clark and was gone for an 82-yard touchdown.

"We had a good season up to that point, but when we went into Baltimore and beat them the way we did, it kind of proved to ourselves that we were who we thought we were," Bengals quarterback Joe Burrow said. "And we just built from that point on."

Cincinnati returns to play the Ravens on Sunday night in Baltimore, the site of the Bengals' 41-17 victory last season. Cincinnati also trounced the Ravens 41-21 in a December rematch, when Burrow threw for 525 yards against a depleted Baltimore secondary. The Ravens have dropped their share of close games over the past couple years, but the Bengals are the one team that's really made them look bad.

Chase had eight catches for 201 yards in the first meeting with the Ravens last season, and in the second, Tee Higgins had 12 receptions for 194 yards and two touchdowns.

The defending AFC champions started a bit slowly this season, dropping their first two games, but the Bengals (2-2) rebounded with two wins after that. The Ravens (2-2) could easily be undefeated, but they blew leads of 21 points against Miami and 17 last week against Buffalo - both times at home.

"I love watching him play," Burrow said. "If feels like every couple of minutes he just makes a play that makes your jaw drop. I mean you look at the defense and (say), `What are we supposed to do with that guy?'"

STUCK IN THE MUD

The overhauled Bengals offensive line has in the past two games provided better pass protection for Burrow, but the running game has yet to benefit.

After rushing for 82 yards in a Week 1 loss to the Steelers, running back Joe Mixon has stalled.

In the fourth quarter of Cincinnati's 27-15 win over Miami two Thursdays ago, the Bengals had first-and-goal at the 6, but three straight carries by Mixon came up short, and they had to settle for a field goal.

Mixon was a Pro Bowler last season but has only 224 yards on 82 carries in four games this year. The Bengals rank near the bottom of the NFL with 3.1 yards per carry.

"I have to get better, and I will get better," Mixon said. "I know for a fact that some point something's got to give. I look forward to it."

"We need to get our first victory at home," Jackson said. "We took two `Ls' at home, that's something that rarely happens here, but I know the stadium is going to be rocking."

Higgins had shoulder surgery after the Super Bowl that kept him out of action through summer workouts and the preseason. He left the Week 1 loss to the Steelers with a concussion and then went out after taking a scary head shot from LaMarcus Joyner in Week 3 against the Jets.

Regardless, the receiver is starting to look more like his old self.

Higgins had five catches for 93 yards in the win over the Jets. Against the Dolphins, he caught seven of his nine targets for 124 yards, including a 59-yard touchdown.

Baltimore running back J.K. Dobbins recently returned from a knee injury that kept him out all last season, and the Ravens might need more from him with Justice Hill nursing a hamstring problem.