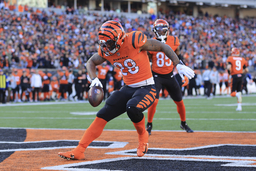 CINCINNATI (AP) Bengals cornerback Mike Hilton, who played for the Steelers for his first four years, got his first pick-6 at any level of football against his former team late in the first half Sunday.

Hilton's interception of Ben Roethlisberger put Cincinnati up 31-3 and seemed to serve as a symbolic turning point in the Steelers' longtime domination of the Bengals and the AFC North.

"To do it against those guys in a big division game, it couldn't be any sweeter," Hilton said as his teammates shouted and the music thumped in the locker room next door.

The 41-10 win by the Bengals (7-4) on Sunday followed a double-digit win in September, making it Cincinnati's first season sweep of the Steelers since 2009.

A 27-17 upset by the Bengals last Dec. 21 broke an 11-game winning streak by Pittsburgh in the series.

"Beating these guys, for me twice and for some of those other guys three times straight, is a big change of the guard in our opinion," said Hilton, who signed with Cincinnati as a free agent before the season. "It's given us a lot of confidence, and guys are excited to see how the rest of the season plays out."

Joe Mixon rushed for a career-high 165 yards and two touchdowns, Joe Burrow scrambled for a score and passed for another one as the Bengals crushed the Steelers (5-5-1) and kept them winless in their past three games.

And the Bengals stamped themselves as a legitimate playoff contender.

Mixon, coming off a rugged 123-yard, two-TD performance in a win over Las Vegas last week, pounded away for 117 yards in the first half.

"To be honest I feel like I'm starting to reach that point, my prime, like starting to get there," said Mixon, who was slowed by a foot injury last season. "I know what type of speed the defense comes with, I know how to slow the game down myself. As much as it comes down to me making plays, that has to do with my teammates."

Cincinnati scored on its first four drives, and then Hilton jumped James Washington's route and ran it back 24 yards for a touchdown with 30 seconds left in the half.

"It was a big moment, it was an emotional moment," Bengals coach Zac Taylor said. "For Mike to turn around and go the other way with it really kind of catapulted us to what we wanted to do the rest of the day."

The Bengals defense kept Roethlisberger from getting any real traction until it was too late. He was picked off twice and sacked three times, finishing with 263 yards. His 15-yard TD pass to Pat Freiermuth came late in the game.

"Not a lot to be said," Roethlisberger said. "You get your butt kicked - it happens. These things happen."

Burrow was 20 for 24 for 190 yards, throwing a 32-yard touchdown pass to Tee Higgins, and dived for an 8-yard TD to open the scoring in the first quarter for the Bengals.

Higgins had six catches for 114 yards and a TD.

"I felt like we were rolling the whole day," Burrow said.

Burrow said flipping the script on Pittsburgh is nice, but he's not dwelling on it.

"We're 2-0 against them, but we got higher aspirations than beating the Steelers right now," the second-year quarterback said.

"Really, just the way I look at it right now, to be 3-1 (in the division, that's the position we wanted to be in," Taylor said. "It's not about dominating anybody."

"We've got a lot of work in front of us," Steelers coach Mike Tomlin said. "We make no excuses. We see no comfort. It is what it is - we stunk it up today."