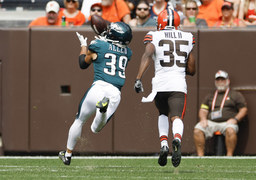 Dobbs ran for a touchdown and led Cleveland's offense on four scoring drives during a 21-20 loss to the Philadelphia Eagles on Sunday in an exhibition watched by both teams' starters, along with soon-to-be-suspended Browns quarterback Deshaun Watson.

Dobbs scored on a 3-yard run in the first quarter - one play after a sensational 36-yard scamper - and had his second strong preseason performance for the Browns (1-1), who are hoping he can be their No. 2 quarterback behind Jacoby Brissett while Watson serves an 11-game suspension.

While he's only attempted 17 passes in the regular season since being drafted in 2017, Dobbs looks seasoned, prepared and confident.

"I always feel ready," Dobbs said. "Whenever my number's called, I prepared a ton, watched a lot of football in my time in the NFL. So whenever my number is called as you saw today, and last week and in the future, I plan on being prepared and going out and executing."

Dobbs finished 14 of 20 for 141 yards before Josh Rosen replaced him in the third quarter. Dobbs, who signed with Cleveland in April, has been ahead of Rosen throughout camp and probably will stay there.

"I would say I'm playing well," Dobbs said when asked if he's opening eyes. "I'm doing everything that I expect myself to do. And I know if I do that, then I'll be in the right position that I need to be."

On his scoring run, Dobbs fumbled the snap and scooped it up before taking off toward the end zone.

"I kind of ran exactly what the running back would have run, so may or may not have stole his touchdown," Dobbs said with a laugh. "I told D'Ernest (Johnson) I'll get him back for it for sure."

With starting QB Jalen Hurts in street clothes on Philly's sideline, Minshew directed a 14-play opening drive and followed it with a 17-play march, both ending in short TD runs for the Eagles (1-1).

Minshew finished 14 of 17 for 142 yards before turning things over to Reid Sinnett in the second half.

Sinnett hooked up with speedy rookie wide receiver Devon Allen on a 55-yard TD pass in the third quarter to put the Eagles ahead 21-20.

It was the first catch in an organized game in six years for the 27-year-old Allen, an Olympic hurdler trying to make Philadelphia's roster.

"That was a sweet play, wasn't it?" Eagles coach Nick Sirianni said. "It was awesome. I was so happy for him. I think it's hard to go and do what Devon's done. He hasn't played football in a while and he's slowly getting into it.

"He's getting into the groove right there. He hasn't played football in five years, but for the whole time, we thought he was really fast. What a great ball by Reid. What a great catch and route by Devon."

Allen was thrilled to make a big play, and celebrated by sprinting and pretending to clear two hurdles in the end zone.

"It's hard to explain that feeling," he said. "During the game, I feel like I blacked out kind of. It's just fun. I was super excited. I saw (WR) A.J. Brown run down 60 yards down the sideline to celebrate, which was pretty cool. It was pretty amazing."

This was the Browns' first game since learning Watson will be out until at least December after agreeing to the lengthy suspension for violating the NFL's personal conduct policy.

On Thursday, the three-time Pro Bowler accepted a settlement with the league, ending months of speculation about his status. Watson will sit 11 games, pay a $5 million fine and undergo evaluation and counseling before returning.

In advance of the game, the Eagles and Browns practiced together for two days, allowing Sirianni and Cleveland's Kevin Stefanski to get valuable reps for their starters.

Minshew, who made two starts last season when Hurts was out with an ankle injury, went 4 of 4 for 43 yards on Philadelphia's game-opening possession, which ended with Boston Scott barreling in from the 1.

Browns rookie kicker Cade York showed off his powerful right leg in his first game at FirstEnergy Stadium. The fourth-round draft pick from LSU converted on kicks from 50 and 19 yards, but he hit the right upright with a 55-yarder that had plenty of distance.

"It felt like college, honestly," York said. "Not too different, just a nice little scrimmage with people there."

Eagles: CB Josiah Scott went out in the second quarter. LB Patrick Johnson, DT Marvin Wilson and LB Shaun Bradley suffered injuries in the third. The team did not specify their injuries or provide any updates.

Browns: It was a tough day for defensive backs as rookie Martin Emerson Jr. (finger), A.J. Green (head) and Herb Miller (leg) all went off. Stefanski said Emerson's injury isn't serious. The third-round draft pick from Mississippi State has had a solid summer, returning an interception for a touchdown last week at Jacksonville.

Eagles: Wrap up their preseason on Saturday in Miami.

Browns: Brissett and Cleveland's starters will play Saturday against Chicago.