DeVonta for the victory: Smith stars as Eagles stay unbeaten 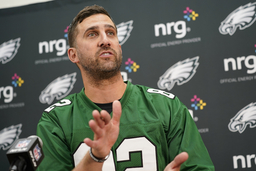 LANDOVER, Md. (AP) DeVonta Smith had a simple mentality when Jalen Hurts threw him the ball in coverage.

Smith made sure of that, catching eight passes for a career-high 169 yards and a touchdown in the Philadelphia Eagles' 24-8 rout of former quarterback Carson Wentz and the Washington Commanders on Sunday. Teammates put a Batman cape on Smith, who surpassed his previous professional high for yards receiving before halftime of another superhero performance for the unbeaten Birds.

"By the eyes he might be a little slight, but he plays like a big boy," said Hurts, who threw for three touchdown passes. "He's a guy when his number's called, I know he'll answer the phone."

Hurts dialed up the bat phone plenty for Smith, who made acrobatic catches along the sideline and to the edge of the end zone for respective gains of 45 and 44 yards, and hauled in a TD pass on fourth down to end the first half with no time left on the clock. The 2020 Heisman Trophy winner out of Alabama has responded in a big way since being held without a catch in the season opener.

And Smith was just one part of another clinical offensive performance by Philadelphia (3-0).

Hurts was 22 of 35 for 340 yards and three touchdown passes, one each to Smith, A.J. Brown and Dallas Goedert. Coming off a three-TD game with two on the ground, Hurts continued to show he could get the job done with his throwing arm, along with his legs.

"He played his butt off again," coach Nick Sirianni said. "What was great there is that they were taking away some of the things in the run game. To be able to go out there and say, `OK, you're doing a good job on the run, let's go pass the football,' Jalen did a great job and we had great playmakers make plays."

The quarterback Hurts replaced as the Eagles starter was completely ineffective and got sacked nine times. Wentz, the second pick in the 2016 draft to Philadelphia on his third team in three years, was 25 of 43 for 211 yards with two fumbles - one lost, which set up Goedert's 22-yard catch-and-run touchdown.

All but 24 of Wentz's passing yards came in the second half, long after the outcome had been determined.

"I've got to be better," Wentz said. "They got after us and I did not play to my standards."

Washington (1-2) had just 50 yards at halftime, and the defense wasn't much better. The troubling trend of giving up big-yardage plays only got worse in the aftermath of a loss at Detroit.

After Smith's catch to the Washington 1-yard line, Brown and other teammates called for noise from the crowd, and they got plenty of it all game. Eagles fans outnumbered Commanders counterparts, with nearly the entire sideline behind the visiting benches full of midnight green.

The stadium at times sounded more like it was in South Philly than near the beltway around Washington. "E-A-G-L-E-S, Eagles!" chants filled the air, and the Commanders even had a false start penalty that could be attributed to the crowd in their home building.

"It definitely felt like a home game just how loud it was, how much green and black was in the stadium," Hurts said.

The Eagles had six sacks in the first half alone. Among the nine for the game, Brandon Graham led Philadelphia with 2 1/2, while Fletcher Cox, Haason Reddick and Josh Sweat each had a sack and a half.

Chalk up a few of those sacks to protection breakdowns combined with a smart game plan by defensive coordinator Jonathan Gannon. Others happened when Wentz held onto the ball too long.

"We were out there having fun," Graham said. "We just played together. The biggest thing for us was doing what we do."

Eagles: Reddick and Goedert each left briefly but returned. ... LG Landon Dickerson played after being listed as questionable with a foot injury.

Commanders: S Kamren Curl was injured in the fourth quarter. ... CB William Jackson (back), DE James Smith-Williams (abdomen), DE Casey Toohill (concussion) and DT Daniel Wise (ankle) were all inactive. Jackson was not added to the injury report until Saturday, and the absence of a starter who played 97% of defensive snaps through two games pressed waiver wire addition Rachad Wildgoose into regular duty.