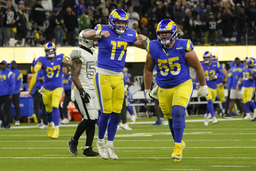 INGLEWOOD, Calif. (AP) Baker Mayfield was waived by Carolina on Monday and claimed by the Los Angeles Rams on Tuesday. After a cross-country flight, he got one short practice with his new team on Wednesday.

And on Thursday night, Mayfield led the Rams to two late fourth-quarter touchdowns and a stunning 17-16 victory over the Las Vegas Raiders, capped by a 23-yard scoring pass to Van Jefferson with 10 seconds left.

Mayfield could only wonder what Friday will bring in this wild week of his life, but the former No. 1 overall pick knows it probably won't be more fun than one of the most amazing moments of his bumpy NFL journey.

"I don't know if you could write it any better than that," Mayfield said. "Obviously, we'd like to be a little bit more stress-free, but it's a pretty damn good story, I'll be honest with you."

"What a quick study," Rams coach Sean McVay said. "He just got here five minutes ago and figured out a way to be able to do some special things tonight."

The Rams went on a 75-yard TD drive moments before the winning drive, the latter of which ended with Mayfield finding Jefferson behind rookie Sam Webb in the end zone. The 98-yard march was the longest go-ahead TD drive in the final 2 minutes of a game over the past 45 NFL seasons.

Los Angeles trailed 16-3 after Daniel Carlson's third field goal with 12:20 to play, but Mayfield got the Rams moving and Cam Akers made a short TD run with 3:19 left, one play after he fought for a first down at the Vegas 1 on a gritty fourth-down catch.

The Rams' defense stopped Derek Carr and the Raiders at the 2-minute warning, but AJ Cole dropped a 64-yard punt at the Rams 2.

Undaunted and with no timeouts, Mayfield led the Rams downfield again - with ample help from an unsportsmanlike conduct penalty on the Raiders' Jerry Tillery for knocking the ball out of the quarterback's hands after a play. The drive included a contested 32-yard reception by Ben Skowronek, who finished with career highs of seven catches for 89 yards.

"Man, you forget what winning is like, and it sure is fun," McVay said after the Rams' first victory since Oct. 16.

Josh Jacobs rushed for 99 yards and the only touchdown for the Raiders (5-8), whose three-game winning streak ended in humiliating fashion. Less than four weeks after Las Vegas lost in former ESPN analyst Jeff Saturday's NFL coaching debut with Indianapolis, the Raiders lost to a quarterback who joined his new team less than 48 hours before the game and had just one brief walkthrough practice.

"We've played against (Mayfield) before and know he's a really good competitor," Raiders coach Josh McDaniels said. "He made some critical throws for them. We prepared for all three quarterbacks, not necessarily knowing who we were going to get and on a short week, so give them credit. He made enough plays."

Carr passed for 137 yards with no TDs and two interceptions. Davante Adams made two jaw-dropping catchesin the first half, but had none in the second half while Las Vegas' offense managed only 67 yards.

"We left some plays and points out there," Carr said. "And then at the end of the game, I just didn't think we finished it how we could have finished it to win the game. You know, not even having to put the defense out there or anything like that. We just didn't execute."

John Wolford ran the opening series for the Rams' offense, but McVay then turned it over to Mayfield, a player he has long admired. Mayfield was having a terrible season for the Panthers, but he improbably injected a spark into the Rams with a handful of big plays and decent drives despite minimal knowledge of the playbook.

"There was kind of a shortened list of plays that I was really, really studying," Mayfield said. "I will say we dipped out of that little list and got into some other things."

With McVay apparently giving detailed instructions into his helmet before each huddle, Mayfield immediately got the Rams moving. Akers short-circuited Mayfield's solid second drive with a fumble in the red zone, but Rams linebacker Ernest Jones made an end-zone interception late in the first half.

Mayfield completed 15 of his 20 passes in the fourth quarter, flawlessly directing his new teammates downfield for two scores.

"I love to compete," Mayfield said. "I love this game."

Jacobs injured his hand early in the second half and briefly went to the locker room, but kept playing. ... Aaron Donald (high ankle sprain) missed his second game due to injury in his nine-year NFL career. ... Raiders RG Alex Bars injured his knee on the opening drive and didn't return. ... Rams WR Jacob Harris injured his shoulder playing special teams in the second half.