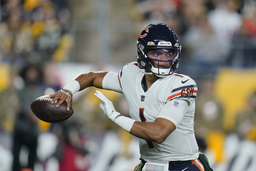 LAKE FOREST, Ill. (AP) As he prepared to jump from Ohio State to the NFL, Justin Fields made sure to study Lamar Jackson last season.

Now, he gets an in-person lesson.

Jackson and the AFC North-leading Baltimore Ravens look to shake off a tough loss when they visit Fields and the Chicago Bears in a matchup between teams with dual-threat quarterbacks.

"Last year, when I was in college, I would turn on his highlights and study how he ran the read option, how his feet were and how he kind of got a running start," Fields said. "When he runs the read option, he staggers his feet so he can, like, be already in a running position to run the ball after he's reading the defensive ends. So last year, I kind of just watched how he operated that."

Fields, the No. 11 overall draft pick, hopes to reach Jackson's level. He'll try to build on his best performance as the Bears (3-6) come out of their bye looking to snap a four-game losing streak.

The Ravens (6-3), meanwhile, hope to get back to winning after being beaten 22-10 at Miami last week. They had a difficult time dealing with the Dolphins' blitzing, and now coach John Harbaugh expects at least some of the same from Chicago.

"Certainly have to be prepared for it," Harbaugh said. "I would expect them to blitz, based on what they saw (last) Thursday."

Jackson, the 2019 MVP, was sacked four times by the Dolphins and held to 39 yards rushing. But the Ravens come in with 12 straight wins against NFC opponents, which is the NFL's longest active interconference run.

For the Bears, it has been nothing but losses since they beat the Raiders in Las Vegas on Oct. 10. But at least Fields is showing progress.

He threw for a career-high 291 yards against Pittsburgh under the Monday night lights before the bye and helped the Bears take the lead in the closing minutes. The Steelers pulled it out 29-27, making this the third straight year Chicago lost at least four in a row.

"The only way to get back to it is to say, `OK, why is this going on?'" coach Matt Nagy said. "It's no one's fault other than everybody's. Now we pick the pieces up and we get a chance to play a great football team that's really well coached, at home, and what are we gonna do about it?"

The Ravens caught some breaks over the weekend when nobody else in the AFC North won. Pittsburgh played to a tie with winless Detroit, and Cleveland lost big at New England. Cincinnati was off.

"It's awesome that we're still in control of our own destiny," Ravens tight end Mark Andrews said. "That's all you can really ask for, but this is going to be a tough division."

The last time the Bears won following a bye, Marc Trestman was in his first season as their coach.

Chicago beat Green Bay at Lambeau Field in 2013, after Aaron Rodgers fractured his left collarbone being sacked by Shea McClellin on the Packers' first series.

The Bears have dropped seven straight after off weeks, including three each under John Fox and Nagy.

"I do know from where I came from, he has a pretty good record," Nagy said, referring to mentor Andy Reid's 19-3 regular-season record following byes. "I tried to follow that early on in my career, and it did not work. Not that you have to change or anything like that. I think some of it, too, is based off where you're at as a team. And this is the route we went this year. I think the guys feel better mentally. But there's nothing specific that I'm getting to that I think, `We have to do it this way all four years.'"

Fields is a threat to run as well as pass. Baltimore, of course, knows exactly how difficult that can be to defend - the Ravens have Jackson.

"If you rush and you're going back there wild, all out of control and don't have any balance, you're not going to get him," Baltimore linebacker Justin Houston said. "So you want to rush and be under control."

The Bears have fared well against the Ravens with a 4-2 record.

Chicago has won the past two meetings in overtime, most recently at Baltimore in 2017. The Bears are also 3-0 against the Ravens at Soldier Field.

Ravens receiver Rashod Bateman is catching on quickly after a late start to his rookie season because of injury issues. The No. 27 overall pick has 18 catches in four games, including a career-high six last week.