Browns RT Conklin back from grisly injury, ready for Ravens 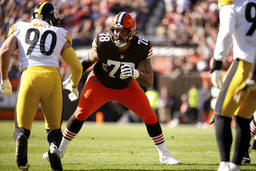 CLEVELAND (AP) Browns right tackle Jack Conklin vividly remembers the scary moment when he wondered and worried his season might be over. Something was noticeably out of place.

"When you're on the ground and your arm is facing the opposite direction, it's a little nerve-wracking," he said Friday.

Well, Conklin's left arm is back in its proper position, and Cleveland's topsy-turvy season is suddenly looking more on course after much turbulence.

The two-time Pro Bowler returned from a dislocated elbow sooner than expected. Conklin will be activated from injured reserve and play Sunday night when the Browns (6-5), who are as healthy as they've been all season, play the first of two games in three weeks against the AFC North-leading Baltimore Ravens (7-3).

Conklin's impressive comeback coincides with one by dual-threat running back Kareem Hunt, who missed Cleveland's past five games with a calf injury, a loss that crippled the Browns' running and passing games.

Conklin still isn't sure exactly what happened on Oct. 31, when he went to brace himself from hitting the ground early in a game against Pittsburgh and got kicked. His elbow "just popped out" and as the medical team summoned the cart to take him from the field, Conklin, who would walk off himself, began to fear the worst.

"Definitely was worried about it and luckily it wasn't a season-ending injury or anything like that," Conklin said following Friday's practice. "Never want to get hurt and be out, but happy it was short term and able to get back out here."

The Browns weren't sure when they'd see him again, but he returned to practice Wednesday and offensive coordinator Alex Van Pelt hasn't detected any rust.

"Jack looked like he has not missed a beat," Van Pelt said.

The Browns, on the other hand, were not in rhythm without the versatile Conklin, regarded as one of the NFL's top right tackles. His replacement, Blake Hance, struggled on the outside, and Cleveland's high-powered running game was missing a key ingredient.

Conklin, who missed the minimum three games on IR, will play with a hinged brace on his left arm going forward.

"I'm used to it. The way they make this stuff now, it's pretty comfortable," Conklin said. "It's not slowing me down. It's just there to help protect it. I think I could even play without it if I wanted to, but I want to keep it on, just to keep it safe."

As if there was any doubt about his toughness, Conklin practiced Friday in shorts and went sleeveless despite temperatures in the low 30s and snow falling.

"I try to wear the same thing from the first day of camp until the end of the season, and I'm from Michigan, so I'm used to this," he said.

Conklin's teammates weren't that surprised to see him bounce back from a serious injury so quickly.

"Nah, the kid's tough," said star defensive end Myles Garrett. "I shouldn't call him a kid, he's older than me. But when he was out here with no sleeves on, he had shorts on, he doesn't care. If there's not something torn or completely snapped off the bone, he's coming out here and practicing as hard as he can."

After dealing with numerous injuries, the Browns are close to being at full strength at just the right time.

Conklin didn't downplay the importance of Sunday's matchup, which could go a long way to determining a division winner.

"This is where everybody's packed together, especially this year, and if you can win games in December and November and stuff, then you're going to put yourself in a good position to make the playoffs," he said. "That's all we can hope for right now and that's all we can focus on."