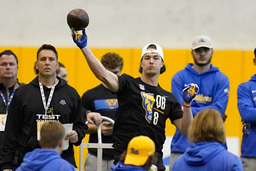 PITTSBURGH (AP) Kenny Pickett stayed in school at Pittsburgh an extra year just so he could move next door.

Now all the Pittsburgh Steelers' newest quarterback has to do is replace a future Hall of Famer, beat out two veterans for the starting job and do it all while trying to maintain the perpetually high standard of a franchise that hasn't endured a losing season since he was in kindergarten.

"There's no panic in him," Pittsburgh general manager Kevin Colbert said after the Steelers grabbed Pickett with the 20th overall pick in the first round of the NFL draft on Thursday night.

Pickett will need to rely on that composure while he grapples with the enviable yet mammoth task of taking over for Ben Roethlisberger, who retired in January following 18 seasons that included two Super Bowl wins, an appearance in another and a reputation as one of the best clutch performers in league history.

Coach Mike Tomlin said Pickett will "certainly" be given the opportunity to start right away. Pickett joins a quarterback room that includes former No. 2 overall pick Mitch Trubisky - signed to a two-year deal in March - and Mason Rudolph.

Pickett made a splash as a freshman at Pitt in 2017 when he engineered an upset against then-unbeaten and second-ranked Miami in the regular-season finale. The legend of "Kenny Perfect" was born, though his production was only so-so over 2018-20 while playing for middling Pitt teams that essentially spun their wheels in the ACC.

He entertained the idea of entering the 2021 draft before ultimately deciding to return to the Panthers for a fifth season. It's a decision that changed the arc of his life and - now potentially - the arc of the storied franchise that the Panthers share a training facility with.

All Pickett did last fall was throw for 42 touchdowns, be named the ACC Player of the Year and finish third in the Heisman Trophy voting behind Alabama quarterback Bryce Young and Michigan defensive end Aidan Hutchinson. Oh, and he led the Panthers to an 11-2 regular season and the program's first ACC title.

The Steelers, who notoriously passed on former Pitt star and future Hall of Famer Dan Marino in the 1983 draft, watched Pickett's evolution in real time. Colbert and Tomlin were eventually won over by Pickett's maturity, accuracy and even his mobility.

While Pickett might not have the flash of Liberty's Malik Willis, he can more than handle his own when asked to make plays with his legs instead of his arm. Look no further than his 58-yard touchdown run against Wake Forest in the ACC championship game for proof, a sprint highlighted by a fake slide so good the NCAA outlawed the move almost immediately.

"I'm going to ask that he slide when he gets in certain circumstances," Tomlin said with a laugh.

Tabbed as a potential successor to future Hall of Famer Steve Young, Druckenmiller lasted just two seasons with the 49ers before being traded to Miami and never playing in the NFL again.

Fast forward a quarter-century and the pressure placed on rookie quarterbacks has only grown. That's fine by Pickett, who will turn 24 in June.

"I can't wait to get in the building and, you know, go chase championships with those guys," he said.

Good thing, because it comes with the territory when you play in the side of the building where you walk past six Lombardi Trophies every day.

The Steelers knew they'd likely be in the market for a quarterback this time around, and Colbert and his staff dove headfirst into the search. They saw some prospects play at least a half-dozen times and went through extensive interviews with seven of them.

While Colbert played coy during the run-up to his final draft with the team before retiring, the reality is the Steelers needed a quarterback the second Roethlisberger officially stepped away. Dwayne Haskins' tragic death on a Florida highway earlier this month only heightened the urgency.

After the smoke cleared, Colbert settled on the prospect next door. One who already knows how to get to work. One plenty familiar with Steelers offensive coordinator Matt Canada, who was working in the same position at Pitt in 2016 when he recruited Pickett out of Ocean Township High in New Jersey.

Canada left for a job at LSU before Pickett arrived on campus. Now they are reunited in the pros and in some ways intrinsically tied to one another. Canada's job will be to bring Pickett up to speed as quickly as possible. Pickett's job will be to prove his breakout 2021 was a sign of things to come.

"I obsess over (getting better) and that's what I'm to continue to do," he said. "You know, nothing really changes in terms of my mindset and how I go about my business. ... I just can't wait."