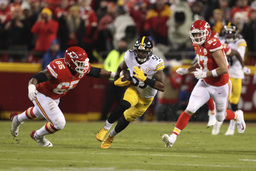 PITTSBURGH (AP) Devin Bush will be playing for his job in 2022.

The Pittsburgh Steelers have declined the fifth-year option on the inside linebacker, meaning he can become a free agent next spring.

Pittsburgh traded up in the first round of the 2019 draft to take Bush with the 10th overall pick. Bush played well as a rookie, getting 109 tackles with two interceptions and a sack while finishing third in the league's Defensive Rookie of the Year voting. Bush's career, however, hit a setback when he tore the ACL in his left knee against Cleveland in October 2020.

He returned in time to start the 2021 season but saw his playing time fluctuate. He played 79% of the defensive snaps last fall, compared to 82% as a rookie and 90% pre-injury in 2020.