Steelers' Tuitt retires: 'Called to move beyond the sport' 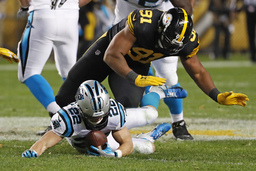 The Pittsburgh Steelers' defensive lineman announced his retirement on Wednesday, saying he feels called to move on from the game following the death of his younger brother in June 2021 and Tuitt's recent graduation from Notre Dame.

"I am thankful to have had the opportunity to represent the city of Pittsburgh for the past eight seasons, and am blessed to leave this game with my health," Tuitt said in a statement released by the team.

Tuitt had 34 1/2 sacks with the Steelers, who selected him in the second round of the 2014 draft. He had a career-best 11 sacks in 2020 while helping Pittsburgh win the AFC North title.

Tuitt, however, did not play last season after his younger brother, Richard Barlett III, was killed in a hit-and-run accident in Georgia last June. Tuitt also underwent knee surgery over the summer and while he did go through an extensive rehab, he did not return to action. His teammates expressed optimism that Tuitt would play in 2022, with good friend and defensive captain Cam Heyward saying he believes Tuitt would be back "sooner or later."

"My brother was hurting last year," Heyward said last week. "And he had to do some things in his life to get right. His knee wasn't right. I can't imagine being in the situation he went through, but I think he's in a much better place."

Yet rather than line up alongside Heyward, Tuitt instead will get on with his life's work.

"I know I am being called to move beyond the sport of football," Tuitt said. "I want to thank everyone for the love and support they have shown both on and off the field."

The Steelers gave Tuitt plenty of room to sort out his future during the offseason while also adding depth at the position should Tuitt opt not to come back. Pittsburgh re-signed defensive tackle Montravius Adams and drafted defensive end DeMarvin Leal from Texas A&M in the third round of the draft.

How they replace Tuitt will be sorted out over the coming months.

"His success both on and off the field speaks volumes for who he is as a person and a player," Steelers general manager Omar Khan said in a statement. "Stephon has always handled himself with class and maturity as he continues to be a great husband, father, son and family man in his personal life. ... We are excited for what lies ahead in his life and will continue to support him in any way we can."