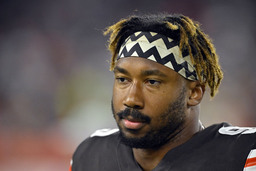 ATLANTA (AP) The Cleveland Browns will be without both starting defensive ends for Sunday's game against the Atlanta Falcons after listing Jadeveon Clowney as inactive.

Clowney will miss his second consecutive game with an ankle injury. He didn't practice this week and had been listed as questionable.

On Saturday, the Browns ruled out Myles Garrett, giving him more time to recover from multiple injuries suffered when he crashed his Porsche on Monday. Garrett hurt his shoulder, biceps, had several cuts and bruises, and broke a blood vessel in his left eye when he lost control while speeding. His car veered into a ditch, hit a fire hydrant and flipped several times.

Rookie Alex Wright and Isaac Rochell are expected to start at defensive end.