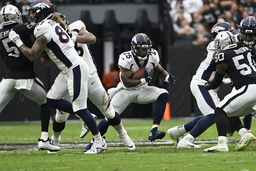 LAS VEGAS (AP) Russell Wilson had his most productive day with the Broncos, but it wasn't enough to overcome numerous mistakes and an awful third quarter by Denver's offense in a 32-23 loss to the Las Vegas Raiders on Sunday.

"I thought we battled in a tough environment. ... I thought we did some really great things in the first half, we really executed well and made some big plays," said Wilson, who completed 17 of 25 passes for 237 yards and two touchdowns. "And then in the third quarter, we hurt ourselves."

The Broncos' totals for that quarter: 11 offensive plays for 7 yards over three possessions, all of which ended in punts.

To its credit, Denver's defense responded by limiting the Raiders to one field goal in the third quarter. But the offense couldn't stay on the field.

Denver, which came into the game converting 37% of its third downs, was a dismal 3 for 11 (27%) on Sunday, with seven of those attempts coming on third-and-8 or longer.

"I think the biggest thing is that the third quarter, we kind of hurt ourselves - that's the game."

The Broncos also wasted three opportunities with good field position - twice in the second quarter when they kicked a field goal and when Melvin Gordon III fumbled, leading to a touchdown by Raiders cornerback Amik Robertson - and once in the third quarter.

Denver, which came into the game with a league-high 30 penalties for 236 yards, was penalized seven times for 50 yards.

Despite their miscues, turnovers, penalties, and finishing with less than 300 yards of offense for a second straight game, the Broncos made it close late. Wilson ran for a 3-yard touchdown that cut the Raiders' lead to 25-23 after torching the Raiders' secondary with a 55-yard pass to KJ Hamler on the previous play.

Wilson joined Tom Brady, Matt Ryan, Aaron Rodgers, Matthew Stafford and Joe Flacco as active quarterbacks to reach the 38,000-yard mark. Sutton caught five passes for 52 yards and a touchdown and is off to the best start of his career with 24 receptions and 343 yards through four games.

But Denver couldn't stop the Raiders' Josh Jacobs, who finished with a career-high 144 yards rushing and two touchdowns, including a 7-yard scamper with 2:07 left that put the game away.

"We'll have to study the film, figure out where we can get better. I think it's gonna be simple," Wilson said. "Just try to stay away from penalties, and staying on schedule. That's probably the biggest part of this game, and then just keep believing each other."