Gordon's butterfingers are getting costly for Denver Broncos 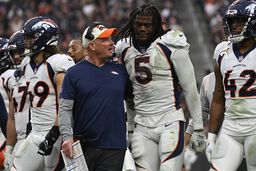 ENGLEWOOD, Colo. (AP) Melvin Gordon's butterfingers have become a hazard for the Denver Broncos, especially with Javonte Williams' season-ending knee injury and Mike Boone's problems picking up the blitz and holding onto passes.

The Broncos (2-2) have a condensed week to fix their backfield bugaboos ahead of their game Thursday night against Indianapolis (1-2-1).

Gordon's latest flub changed the tenor of the Broncos' game at Las Vegas, where they lost to the league's only 0-3 team and their former coach Josh McDaniels while also losing Williams and Randy Gregory to knee injuries.

Gordon was crestfallen on the sideline after fumbling on his first carry and watching cornerback Amik Robertson return it for a 68-yard touchdown that jump-started the Raiders' 32-23 win.

Gordon drew plenty of kudos from reporters for being a standup guy and taking questions afterward - but he walked off the podium without responding when asked about working on ball security last week following a pair of fumbles against the 49ers.

"In the end, you can't put the ball on the ground. It's that simple," Nathaniel Hackett said after the game.

A day later, Hackett was pumping up his dejected running back ahead of Thursday night's game against the Colts.

"Melvin's a true pro. I mean, this is a guy that's been doing this for a long time," Hackett said Monday. "He's harder on himself than anybody. And he's part of our team. We love the guy. I mean, he knows that there was a mishap right there. And it's a great opportunity for him to get back out in the field and prove himself and we're excited to be part of it and to put him in great position to be able to make plays, and we'll watch him do some good things."

"I thought he ran real hard. I mean, he's run the ball really well. I mean, he's going downhill, he's exploding through the hole," Hackett said. "And we want to see that continue. And like I said, he's a true pro. I expect for him to step up and have a great game."

Gordon has fumbled four times in four games this season, and five times in five games going back to last season. And this was his third fumble since last season that's been returned for a touchdown.

"My job is to go out there and make plays, hold onto the ball and to help put this team in the best position to win," Gordon said after the game. "I didn't do that (Sunday). But I'll be all right."

Maybe, but his fumble Sunday was his fifth in 44 touches, or once every 8.8 touches.

The Broncos knew this was the flip side of Gordon's tough runs and superb pass protection when GM George Paton re-signed him to a one-year, $2.5 million contract this spring that could go up to $4 million with incentives.

Ever since fumbling a half-dozen times his rookie year in 2015, Gordon has had trouble holding onto the football.

Nobody in the NFL has more fumbles (25) or lost fumbles (18) than Gordon in the past decade.

Quarterback Russell Wilson seems to be getting more comfortable in Hackett's offense, or maybe it's the other way around. But after going 11 for 12 for 149 yards and two touchdowns in the first half, Wilson was just 6 for 13 for 88 yards with no TDs after halftime.

Hackett keeps reminding everyone that he's a rookie head coach with a lot to learn. The latest example came Friday when he downplayed the rivalry with the Raiders, saying: "Can't really hate anybody in this world. That's too much energy ... It's another game, we're excited to go against the Raiders."

Rookie Montrell Washington, who had 66 yards on three punt returns.

Left tackle Garett Bolles' holding habit is back at a time when he needs to be the stabilizer on a line missing Quinn Meinerz and Billy Turner.

29 - Number of yards Wilson had on four carries Sunday, when he ran for a touchdown and a key first down, signs he's getting back to being himself.

The Broncos host the equally banged-up Colts (1-2-1) on Thursday night.