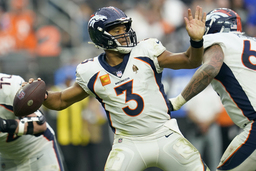 DENVER (AP) Russell Wilson and Matt Ryan can sure feel each other's pain.

None of the nine NFL teams that changed quarterbacks this season has a winning record heading into October.

Both QBs have found a rough transition to their new teams and both are missing key offensive and defensive players on a short week.

New surroundings, new teammates, new terminology are all hurdles that even former MVPs such as Ryan or Super Bowl winners such as Wilson have to overcome.

"I think there's definitely an adjustment of learning kind of the new verbiage," Ryan said. "I liken it to when you're learning Spanish or whatever when you're in high school and you know what you want to say, and sometimes just can't get it out."

He said he's getting fluent in his new system, and Wilson said so is he.

"I think here, the transition has been great," Wilson insisted. "Obviously, it's a different environment, a different challenge and everything else, but I think what's made it so great here, for me personally, is my teammates."

Wilson, however, has lost some of those teammates, notably wide receiver Tim Patrick and featured running back Javonte Williams to injured knees. Also out for at least a month with an injured knee is pass-rushing free agent acquisition Randy Gregory.

Injuries or not, it's little surprise that Ryan and Wilson are off to slow starts with their new teams as are Marcus Mariota in Atlanta, Baker Mayfield in Charlotte, Carson Wentz in Washington and Jacoby Brissett in Cleveland. Mitch Trubisky was benched in Pittsburgh for rookie Kenny Pickett after succeeding Ben Roethlisberger and going 1-3.

Peyton Manning started out 2-3 in Denver a decade ago before winning 11 straight, and Tom Brady lost five of his first 12 in Tampa two years ago before guiding the Buccaneers to a Super Bowl win.

Even if their QBs hit their strides after struggling through September, similar turnarounds may be asking too much for the Colts and Broncos given the injuries ravishing their rosters.

Nyheim Hines, is set for a heavier workload with Taylor out, and Philip Lindsay also could get significant action for the first time this season.

Lindsay, the first undrafted offensive rookie to make the Pro Bowl when he was with his hometown Broncos in 2018, relishes the opportunity to return to the state where he grew up, played college football and spent his first three NFL seasons.

"It would be a great little story," Lindsay said of having his toddler son see him play in Denver.

Broncos fans were pining for Lindsay - who has never lost a fumble in 703 touches - after Melvin Gordon fumbled for the fifth time in five games Sunday at Las Vegas. It was returned for a 68-yard touchdown and marked his 25th career fumble. After Williams got hurt, Mike Boone went in but failed to pick up a couple of big blitzes and dropped two key passes.

All of this led to the Broncos signing Latavius Murray off the Saints' practice squad Monday shortly after the veteran running back flew back from London, where he ran for a touchdown in New Orleans' loss to the Vikings.

The Broncos had been feeling good about their disruptive defense until losing Gregory and watching Raiders running back Josh Jacobs gash them for 144 yards on 28 carries Sunday.

"Sometimes people get you," Broncos coach Nathaniel Hackett said. "I think for us, it's kind of like how the offense is: don't try to make a play, just trust the system and know that the plays will come to you. It's the same thing with the offense. Everybody wants it so bad and wants to do something special, but that will happen within the defense, within the offense and special teams."

Colts coach Frank Reich didn't even mention altitude when preparing his team this week. They did light work and he explained the focus needed to be not on elevation but execution.

"There was always that mystique about going out there," Reich said. "I think what we've seen over the years is that it's not the factor you think it's going to be."

The Colts aren't just the NFL's lowest-scoring team, they're one of the league's slowest-starting teams. They've been outscored 65-23 in the first half this season and have trailed at halftime of all four games.

"I think we're close, I really do," Ryan said. "The good has been good. It needs to show up more consistently."