Burks' injury forcing Titans to tap next receiver up again 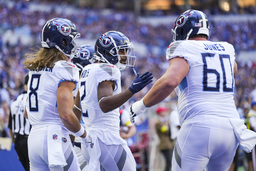 NASHVILLE, Tenn. (AP) Robert Woods spent last season with the Los Angeles Rams, yet even the veteran wide receiver saw from afar what the Tennessee Titans went through last season in playing an NFL-record 91 players.

A month into this season, the Titans feel as if they're trying to match - or top - that number this season.

Currently, the Titans have 10 players on injured reserve with two others on the physically unable to perform list.

Nine on the active roster weren't there during the team's offseason program, not counting another on the practice squad added last week.

That doesn't include Wednesday's injury report led by rookie wide receiver Treylon Burks with an injured toe that could keep him out more than just Sunday's game at Washington (1-3).

"Whoever ends up stepping in there for us and getting a bigger role is going to have to come up huge for us," Tannehill said. "So we have big, strong physical receivers who can use their size and strength to create some space. So we're going to have to do that moving forward."

The Titans (2-2) have only five wide receivers on the current roster, though veteran Josh Gordon is an option off the practice squad.

Fortunately for the team, Woods is available. The receiver the Titans got via trade during the offseason currently leads Tennessee with 13 catches for 167 yards and got his first touchdown reception in last week's win at Indianapolis.

Woods already has noticed how the "next man up" approach is more than just words in Tennessee. He credits Titans coach Mike Vrabel's mindset always reminding players to prepare as if they are starters. That's why the Titans are ready.

"It's just next man up and be prepared like you're going to start," Woods said.

Washington coach Ron Rivera certainly is aware of Woods, a savvy veteran in his 10th season with 7,244 yards receiving. Rivera also is impressed with the rest of the Tennessee receivers, good blockers for a heavy play-action offense that uses a lot of screen passes.

"They move their guys around a lot, so if we're looking to match up, we've got to be very aware as to where everybody's lining up," Rivera said.

The Titans found themselves in a similar situation last year where they had four receivers available for a game in New England. Cody Hollister made his first career start that game alongside Nick Westbrook-Ikhine, an undrafted receiver out of Indiana who has started three games this season.

Rookie Kyle Philips, who missed the Titans' win over the Raiders with an injured shoulder, is no longer on the injury report.

The Titans also can call up Gordon once more this season off the practice squad and keep him on the active roster. If they try to put Gordon back on the practice squad once more, the Titans risk losing him through waivers. Gordon has had a combined 24 snaps in the two games he's played.

"It changes that we don't have him out there, but at the end of the day next man up," Westbrook-Ikhine said.

"So somebody's got to step up. Everybody knows what to do, and there's full confidence in everyone."

NOTES: The Titans opened the 21-day window of practice for ILB Monty Rice to see if he can return from the reserve/physically unable to perform list. ... Starting S Amani Hooker was limited Wednesday, working through the concussion protocol that kept him out of last week's game. OLB Bud Dupree (hip), OLB Ola Adeniyi (neck) and LB Zach Cunningham (elbow) also did not practice. DB Ugo Amadi, who has missed two games with an injured ankle, practiced fully.