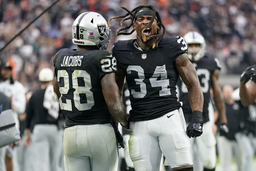 KANSAS CITY, Mo. (AP) There was a play last Sunday night at Tampa Bay when Chiefs quarterback Patrick Mahomes did a pirouette away from a defender, then flicked a pass to Clyde Edwards-Helaire standing in the back of the end zone for a touchdown.

It was the kind of play that perhaps only Mahomes can make, and he made it look easy.

The way Raiders coach Josh McDaniels sees it, those kinds of did-you-see-that plays are going to happen, probably again when the AFC West rivals face each other Monday night. Mahomes is due for at least one a game. The trick is to make sure that one incredible play doesn't set the tone for the rest of the night.

"When you play a great player in any sport," McDaniels said, "they're going to produce some moments like that during the course of the game. I think the biggest thing is you just have to try to be consistent and disciplined in your approach, if you can keep playing and have the right idea and make it as hard as you can on him.

"I think everybody tries to do that," McDaniels added. "Some may have more success than others. But you're not going to stop this guy from doing some really good things for their team. That's just the nature of the sport."

It's what makes facing the Chiefs (3-1) such a daunting challenge.

And unless you're facing them, it's also what makes them so much fun to watch.

"It may be surprising to some," Edwards-Helaire said of those highlight-reel plays, "but it's just one of those things that, not necessarily we work on, but it's scramble rules. It's football, man. Spacing. You have to get to the open spot."

The Raiders (1-3), who are coming off a much-needed win over Denver, have some playmakers of their own on offense, and it will be up to Derek Carr and the rest of them to keep up with Kansas City's second-ranked scoring offense.

Josh Jacobs is coming off arguably the best game of his career, catching five passes while running for 144 yards and two touchdowns. Davante Adams caught nine passes for 109 yards. And fellow wide receiver Hunter Renfrow, who has been out with a concussion since Week 2, was back at practice this week and could play Monday night at Kansas City.

"Any division game, you've got to pay a little bit more attention," Adams said. "We obviously know those are going to be huge games, and especially against a really good team like this. You can't take anybody lightly, but you've definitely got to get up to play a team like this, especially going into their place where the Raiders haven't done a great job in the past."

The Chiefs are hopeful that Harrison Butker, otherwise known as (at)buttkicker7 on Twitter, will return for the first time since spraining his plant ankle in the opener against Arizona. Matthew Wright was perfect as his replacement last week in Tampa Bay, but the Chiefs clearly prefer to have their accurate, strong-legged kicker on the field.

RUN TO THE CARR

Carr ran for a career-high five first downs last week for the Raiders. Two came on short-yardage sneaks and three more on scrambles as he ran for 40 yards, his most productive day on the ground since 2017. And if defenses continue double-teaming Adams, Renfrow and Darren Waller, Carr intends to keep running.

"I take it upon my shoulders and find a lane and go," he said. "It's definitely something I'm conscious about."

The red-zone issues that have plagued the Raiders in recent years still haven't been solved, despite a new coaching staff and an upgraded roster. The Raiders have converted 44% of their red-zone drives into touchdowns, tied for fourth worst in the NFL, and they are fourth worst on defense, too, allowing TDs on 76.9% of red-zone drives.

"It comes down to being locked in and knowing your assignment and being disciplined enough to go execute," Adams said.

The Chiefs are playing in prime time for the third time - one Thursday, one Sunday and now Monday - in their first five games. But don't think for a moment they don't like the spotlight. Kansas City has won its last five Monday night games while Mahomes is 6-1 as a starter in such high-profile contests.

Mahomes and the Chiefs' offense earned most of the plaudits for their 41-31 win over the Buccaneers, but all the defense did last week was allow a franchise-low 3 yards rushing on six carries to Leonard Fournette and Co.

"The thing that makes me most excited is the influx of young guys we've got, and those guys have an opportunity to grow and get better," Chiefs coach Andy Reis said. "If you keep working and do it day-in and day-out, and work, you have a chance to be something special. But you have to stay in that frame of mind."