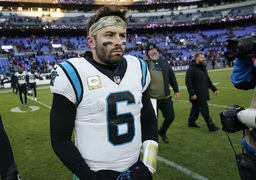 CHARLOTTE, N.C. (AP) The short-lived Baker Mayfield era is over in Carolina.

The Panthers waived the struggling quarterback on Monday after the 2018 No. 1 draft pick asked for his release. Mayfield would be subject to waivers and become a free agent if he goes unclaimed.

The move does not come as a surprise, because Sam Darnold replaced Mayfield after his failed second stint as starting quarterback, and the Panthers like what they have in backup P.J. Walker. The move gives Mayfield a chance to potentially land with a team that needs quarterback help.

Panthers interim coach Steve Wilks said Mayfield asked for his release once he informed the quarterbacks that Darnold would be the team's starter and Walker would be the backup this Sunday at Seattle.

"Baker has been nothing but a professional since he's been here, a complete pro," Wilks said. "I have tremendous respect for him."

Wilks said he made the decision to go with Walker over Mayfield as the backup after "looking at the body of work the last couple of weeks. I felt P.J. has been productive when he was in there."

Mayfield was 1-5 as Carolina's starting QB and completed just 57.8% of his passes, having six touchdowns and six interceptions. He also struggled with tipped passes at the line of scrimmage. The Panthers are last in the league in third-down conversions.

Wilks said he couldn't pinpoint why Mayfield didn't work out in Carolina.

"I can't answer that question," Wilks said. "It is so many different reasons. I wouldn't say that he failed. I would say that it just didn't work out. He is still a good football player. Just like coaches and just like players, sometimes they need a change."

Panthers general manager Scott Fitterer traded for Mayfield earlier this season after unsuccessfully trying to acquire Deshaun Watson from the Houston Texans, and he beat out Darnold for the starting job in training camp. Darnold later injured his ankle and landed on injured reserve and only recently returned to action.

Carolina will send the Cleveland Browns a fifth-round pick in 2024 as compensation.

Fitterer was not made available to reporters on Monday.

"I have nothing negative to say about Baker," Panthers running back D'Onta Foreman said. "I think he handled the situation the right way. Even with his ups and downs you never saw him act different or have a mood change. He was always the same guy. So I respect him and wish the best for him."

Guard Austin Corbett said Mayfield stopped by the offensive line meeting room to inform them that he'd been released before leaving Bank of America Stadium, thanking them and telling them he loved them.

Corbett said he expects Mayfield to land with another team and doesn't blame the QB for asking for his release, given he wouldn't have been activated on game day.

"When you're the number three (quarterback), why not go try to be number two somewhere?" Corbett said. "We saw quarterbacks getting banged up all day Sunday and hopefully he lands in a good situation."

Corbett had been teammates with Mayfield in Cleveland, and he said the move was a reminder to him about how temporary tenures are in the NFL.

"This business strikes again, just being the worst thing ever to make friends in and make connections in," Corbett said. "I love Baker and love his family. He and his wife, Emily, they are just two great people, wholesome people. This business sucks. It's tough. He will get picked up no doubt and we will see him down the road."

NOTES: Wilks said he expects Foreman (foot) and defensive end Brian Burns (knee) to be ready to play Sunday against Seattle after suffering injuries before the bye week. ... The Panthers have added Ian Scott from Central Michigan to replace assistant defensive line coach Terrance Knighton, who left to reunite with Matt Rhule in Nebraska.