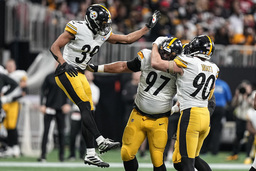 The team listed the reigning AP Defensive Player of the Year as questionable after he was limited in practice on Wednesday and Friday and sat out on Thursday. Wide receiver Diontae Johnson is also questionable with a hip injury that curtailed his practice time this week.

Watt missed seven games earlier in the year after a left pectoral injury suffered in the fourth quarter of an overtime victory against Cincinnati in the opener. He's been quiet, by his standards, since his return. Watt has just one-half sack in four games since coming back and 1 1/2 this season. Last year, he tied the NFL record with 22 1/2 sacks.

If Watt fails to get to Baltimore quarterback Tyler Huntley on Sunday, it would mark the first time since 2018 that Watt has gone three straight games without a sack. Defensive coordinator Teryl Austin stressed that Watt is still making an impact, but Watt's frustration is growing.

Watt only missed four total games over the first five years of his career.

"It's tough," Watt said. "It's stuff out of my control. It's been one thing after another this year, but I don't want to miss any more games. I'm going to try my best to make it happen each and every week."

The Steelers (5-7) have won three of four since Watt's return to give themselves an outside chance of being a factor in the playoff race. Watt said the defense is gaining confidence but can't afford a misstep.

"We don't want to look too far in the future," Watt said. "We just want to have great days, great meetings, good practices, and I feel like we did that this week."

"We will see how it feels when I go out there Sunday," Johnson said. "I'm for sure, in my mind, I`m gonna play."