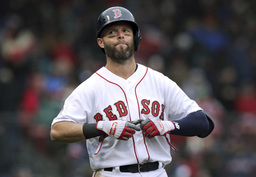 BOSTON (AP) The Boston Red Sox blanketed Fenway Park with pieces of the city's championship past to welcome the newest members of their World Series title club.

It wasn't enough to ward off another setback for a team yet to resemble the one that hoisted the trophy last year.

Chris Sale let a Toronto runner steal home , Mookie Betts fanned with two on for the final out and the Red Sox stumbled again, losing to the Blue Jays 7-5 Tuesday in their home opener.

After getting their World Series rings that had 185 diamonds, rubies and sapphires during a ceremony that included the Super Bowl champ New England Patriots, the Red Sox fell to 3-9. A return to Fenway failed to shake the doldrums that plagued Boston during a season-opening, 11-game trip to Seattle, Oakland and Arizona. The Red Sox dropped to last place in the AL East.

"We're not playing very right now as a team and it's showing," outfielder Jackie Bradley Jr. said. "It's early and these games still count. We have to get better and get better faster."

Red Sox sparkplug Dustin Pedroia went 1 for 4 in his first major league game since May. He played only three times last year while slowed by a knee injury.

The game also made history: It was the first big league matchup of managers born in Puerto Rico, with Toronto's Charlie Montoyo topping Boston's Alex Cora.

Sale (0-3) never seemed comfortable and surrendered five runs and seven hits before being pulled after four innings. His velocity has been down this season - his fastball averaged 91.8 mph in this outing - and he has a 9.00 ERA after three starts.

Sale's day hit a low point in the fourth, after Danny Jansen scored on a passed ball. Gurriel kept extending his lead off third as Sale went into a full windup, then broke for the plate. Gurriel easily scored when Sale's pitch was wide and went to the backstop, making it 5-2.

Mitch Moreland and Betts each had home runs for the Red Sox , who got within 6-5 on a two-out RBI double by Xander Bogaerts in the eighth.

The Red Sox put their first two batters on base in the ninth against Ken Giles. But pinch-hitter Blake Swihart and Andrew Benintendi flied out and, with most of the crowd standing on a chilly afternoon and chanting for Betts, the AL MVP struck out and gave Giles his third save.

While the loss spoiled the Red Sox's celebration, Cora said it hasn't affected their resolve to turn their poor start around.

"Now we got our rings and now we got to get back to playing good baseball," Cora said.

Blue Jays: C Luke Maile and INF Justin Smoak both sat with neck issues. Smoak missed two of Toronto's three games in Cleveland last week due to the issue, which appeared again before the series finale.

Red Sox: Cora said LHP Brian Johnson (left elbow inflammation) went through some testing and that the injury is not as bad as originally thought. "At one point, we thought it was the end of the season. It's not that," Cora said. But there is still no timetable for his return

The Red Sox pulled out all the stops to celebrate their latest title.

While being serenaded by the Boston Pops orchestra giving a rendition of Queen's "We Are the Champions," a giant banner honoring the 2018 champions was unfurled in front of the Green Monster.

Pedro Martinez, Mike Lowell and David Ortiz carried out the 2004, `07 and `13 trophies. Then the 2018 team began filing down the red carpet to collect the championship rings. Cora led the coaching staff and David Price was the first player to receive one.

Also taking part in the ceremony were former Red Sox Manny Ramirez and Curt Schilling, who have been absent from previous commemorations.

Cora and Montoyo became the first pair of Puerto Rican-born managers to face each other in a major league game.

"It was a special moment," Montoyo said.

Cora said it is yet another promising milestone for managers with Puerto Rican ties getting opportunities in Major League Baseball. Nationals manager Dave Martinez was born in New York to Puerto Rican parents.

"At one point before I got hired here we had no Puerto Rican managers," Cora said. "And all of a sudden we have three out of 30. That's a pretty good rate."