Marlins blow lead, then recover to beat Tigers 5-4 in 11 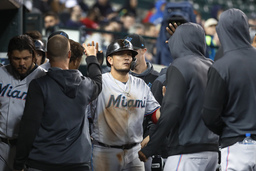 DETROIT (AP) A few innings after his first major league home run, Harold Ramirez nearly made a big mistake in the field.

A replay review offered the Miami outfielder a reprieve.

"I just say to (teammate Rosell) Herrera: `I know I got it, so I know they're going to call out,'" Ramirez said.

Ramirez initially appeared to drop a fly ball in the bottom of the ninth, but the call was overturned after a review, and although Detroit tied the game that inning, the Marlins went on to beat the Tigers 5-4 in 11 innings. Chad Wallach hit a tiebreaking double in the 11th, lifting Miami to its fourth straight victory.

That was the only success Detroit had against the Miami bullpen, though. Nick Anderson (1-1) struck out the side in the 10th, then closed the Tigers out in the 11th for his first career win.

Wallach put the Marlins ahead in the 11th with a two-out drive to left-center field off Joe Jimenez (2-2). The Tigers have dropped seven in a row, although their game Sunday against Oakland was suspended in the seventh inning.

Detroit was down 4-2 and hadn't managed a baserunner since the fourth inning when Niko Goodrum hit an infield single to start the bottom of the ninth. He was initially called out, but replays showed Romo may not have touched first while trying to cover the bag. Goodrum was ruled safe after a review, and when Nicholas Castellanos hit a one-out grounder to third, Goodrum was safe again when second baseman Starlin Castro dropped the throw to second for an error.

"This would have been a tough loss, because we really played well all day, and then just ... kind of shoot ourselves in the foot a little bit there in the ninth," Marlins manager Don Mattingly said.

Miguel Cabrera hit an RBI single off diving third baseman Brian Anderson and into left, leaving men on first and third. Then Ronny Rodriguez lifted a fly ball to deep left field. Ramirez appeared to drop it, and a run came home, tying the game at 4 - but replays showed Ramirez had the ball briefly in his glove before losing control as he tried to transfer it to his throwing hand.

The call was overturned and the batter was ruled out - although the run still counted. Gardenhire came out to argue with third base umpire Fieldin Culbreth, and although Culbreth didn't make a demonstrative ejection motion, Gardenhire disappeared from view in the dugout, and the Tigers eventually confirmed he'd been tossed.

"Obviously the umpire didn't think he had control. Then we go out and they appealed it, and New York said that somehow he did have control," Detroit bench coach Steve Liddle said. "I think that's one of those instances where slow motion can hurt you a little bit, and it looked like it came back to bite us there."

Miami shut out the New York Mets in its previous two games, and the Marlins took a quick 2-0 lead over Detroit. Anderson hit a sacrifice fly in the first inning, and Wallach added an RBI double in the second.

JaCoby Jones hit a solo homer for the Tigers in the third, but Ramirez - playing his sixth major league game - answered with his solo home run an inning later. His teammates followed tradition by ignoring him when he got back to the dugout, so Ramirez playfully high-fived the air.

"I really just tried to enjoy that," said Ramirez, who said he'd give the ball to his mother.

Cabrera made it 3-2 with an RBI single in the bottom of the fourth, but Anderson's solo shot in the seventh restored the two-run advantage for Miami.

Aside from the ninth inning, Detroit didn't have a hit against the Miami bullpen. Austin Brice, Wei-Yin Chen and Tayron Guerrero were perfect from the sixth through the eighth.

After his impressive 10th inning, Anderson allowed a walk in the 11th but held on for the win. He struck out five in two innings.

Detroit's Nick Ramirez allowed only one hit in three innings of relief, but it was the homer by Anderson.

Marlins: Before the game, Miami recalled OF Austin Dean from Triple-A New Orleans and put INF/OF Jon Bertl on the 10-day injured list, retroactive to Sunday, with a left oblique strain.

Marlins: Jose Urena (1-6) takes the mound for Miami on Wednesday night in the middle game of the series. He had a 9.22 ERA in his first three starts, but has since lowered it to 4.44.