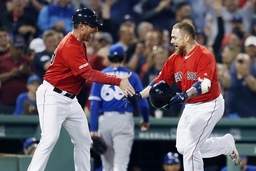 BOSTON (AP) Trailing by four runs in the seventh, the Red Sox needed a little extra time to complete their latest dramatic comeback.

Boston scored three runs in the seventh and another in the eighth to tie the score, then Christian Vazquez won it with a two-run homer in the 10th inning as the Red Sox beat the Toronto Blue Jays 7-5 on Friday night.

"Little by little, things started turning," shortstop Xander Bogaerts said. "We started getting a feeling of `this actually is our game.'"

It was indeed the Red Sox's night, although it didn't appear so earlier as Toronto rookie Trent Thornton kept Boston in check while Boston ace Chris Sale struggled to make it through five innings.

Boston trailed 5-1 before Andrew Benintendi's RBI single and J.D. Martinez's two-run single in the seventh, and pinch-hitter Rafael Devers' run-scoring single in the eighth tied it.

Jordan Romano (0-1) got two quick outs in the 10th before hitting Marco Hernandez with a pitch. Vazquez then drove a 3-2 pitch out to right for his ninth homer of the season to give the Red Sox their eighth win in nine games.

"That's why you never hang your head. Just keep fighting do what you need to do," Sale said. "We're starting to play some good baseball. We're finally getting back to things that make us successful."

Brandon Workman (6-1) pitched a scoreless 10th for Boston, getting himself out of a jam with a nice fielding play on a grounder headed for center field by Eric Sogard, who had four singles in the game.

Randal Grichuk homered for Toronto, which got six strong innings from Thornton but couldn't hold off the late rally by the Red Sox.

"We played a good game against one of the best teams in baseball. You get frustrated when you lose on a walk-off but we played a great game yesterday, another great game today," Toronto manager Charlie Montoyo said.

On Thursday, it was the Blue Jays who rallied to a 10th inning victory over the Angels in Toronto, winning 7-5 on Billy McKinney's two-run homer.

The Blue Jays were on the other end Friday against the resurgent Red Sox, who improved to a season-best seven games above .500 at 42-35.

Boston began its comeback in the bottom of the seventh when Mookie Betts tripled to the triangle in center to start and scored on Benintendi's hit. Bogaerts doubled and Martinez followed with his single to pull the Red Sox within one.

In the eighth, Jackie Bradley Jr. tripled with one out against David Phelps and scored the tying run on Devers' hit to right.

"We strung together some good at-bats and the line kept moving," Boston manager Alex Cora said.

Sale lasted just five innings. He struck out eight, but struggled with his control at crucial times. He didn't retire Toronto in order until the fourth and threw 101 pitches in just five innings while giving up four runs and seven hits with two walks.

"They picked me up. That was big. I put us in a pretty bad hole early on," Sale said.

"He was really good and he's such a bulldog out there. I love watching this kid pitch. He did a great job again," Montoyo said. " He's in command, he's not afraid even in right there, this place with all that noise and stuff. He keeps fighting and making good pitches when he has to."

Red Sox: Devers was out of the starting lineup two days after leaving a game at Minnesota in the fifth inning with tightness in his right hamstring. ... Cora said LHP Eduardo Rodriguez (8-4) and RHP Rick Porcello (5-6) will be the starters when the Red Sox play the New York Yankees next weekend in London.

Red Sox: LHP Brian Johnson (1-1, 10.00 ERA) gets his second start of the season. Johnson pitched three innings Sunday at Baltimore and didn't figure in the decision.