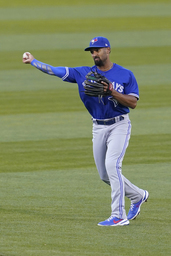 OAKLAND, Calif. (AP) Cole Irvin stepped into Oakland's rotation when experienced starter Mike Fiers went down, determined to prove he could more than handle such responsibility - Fiers has pitched a pair of no-hitters, after all.

With another impressive outing in the Athletics' 4-1 win against Toronto, Irvin keeps showing he's far more than a mere fill-in.

"He's not a seat warmer anymore," manager Bob Melvin said. "He's been consistent the entire season. In a day we're down some guys in the bullpen, eight innings, I either fell asleep or had a lot of confidence in him - one or the other. Probably the latter."

Mitch Moreland hit a two-run homer on the heels of Jed Lowrie's two-run double in the second to back Irvin's gem.

Irvin (3-3) struck out a career-high nine over eight smooth innings in his first start against the Blue Jays, walking off to a standing ovation from the crowd of 2,970 after his final inning. He struck out eight in his previous outing against the Rays and has 29 Ks over his last 25 1/3 innings.

Even as he makes strides, the 27-year-old Irvin insists he will carry a chip on his shoulder.

"It's still there. It's not going to leave me," Irvin said. "I've found something that works for me. I'm going to continue to do it as much as I can and pitch with that mindset of knowing that there's someone out there that doesn't think I should be in a big league uniform."

He allowed three hits and one walk, throwing 102 pitches.

"That guy's got good numbers. He's been doing that against a lot of teams," Blue Jays manager Charlie Montoyo said. "It's all about making adjustments and we didn't do that today."

Yusmeiro Petit finished the 2-hour, 18-minute game for his seventh career save and first since 2017 with the Los Angeles Angels. Petit has a 10-game, 12-inning scoreless streak and hasn't allowed a run in 13 of his last 14 appearances.

The A's improved to an AL-best 19-12, second in the majors only to the Bay Area rival San Francisco Giants, and matched their season high of seven games over .500.

Marcus Semien, the ex-A's shortstop still drawing cheers from his former home crowd, hit an RBI double for Toronto in the sixth.

Oakland faced a left-handed starter for the third straight game, fifth in six and eighth in the last 11 overall, and will see another one Wednesday.

The Blue Jays had yet to announce their starter for Thursday's series finale.

Blue Jays: OF George Springer missed his second straight game and is still experiencing fatigue in his quadriceps muscle that forced him out Sunday. But for now the Blue Jays are not planning further tests or to put him on the injured list, according to Montoyo. "We want him to be comfortable," the manager said.

Athletics: C Aramis Garcia went on the injured list with a stomach flu. "He will be away from us for a time," Melvin said. ... C Austin Allen was recalled from Triple-A Las Vegas. Allen is on the active roster for the first time after spending the first two road trips on the taxi squad. ... LHP A.J. Puk (strained biceps) threw 30 pitches and two simulated innings in the bullpen and will next face hitters in his rehab progression. ... OF Chad Pinder (sprained left knee) went through on-field baseball work in his rehab progression.