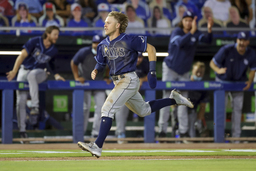 DUNEDIN, Fla. (AP) Taylor Walls hit a pair of doubles in his major league debut and the Tampa Bay Rays won their ninth straight game, 3-1 over the Toronto Blue Jays on Saturday night.

Manuel Margot hit a go-ahead single in the eighth inning and Mike Zunino homered for the Rays. Center fielder Kevin Kiermaier left in the fifth inning with left eye irritation.

Walls is a 24-year-old shortstop who had never played above Double-A until this season. He was called up from the minors after shortstop Willy Adames was traded to Milwaukee on Friday.

"The past 12 hours has felt like five days," Walls said before the game. "The events, they're happening so fast. There's no way all this could happen in just 12 hours."

Walls doubled in the ninth and later scored on a wild pitch and an errant throw to third by catcher Danny Jansen.

Cash is unsure of Kiermaier's status for Sunday.

"I think he's going to be fine," Cash said. "He's got a scratch in his eye that he kind of was batting through. He didn't want to come out of the game. It just didn't make the most sense at that point when he said he was having to blink a lot."

"This game has got a lot of ups and down," Margot said through a translator. "So we have to stay kind of even keel to maintain that positive energy and keep that motivation going game in and game out."

Rays starter Shane McClanahan allowed one run and four hits in five innings. Andrew Kittredge (4-0) threw a scoreless seventh and Diego Castillo worked the ninth to get his eighth save.

Toronto's Robbie Ray gave up one run, five hits and struck out seven in seven innings. The lefty has fanned 49 and walked just one over his six starts.

"He gave us a shot against a good team," Blue Jays manager Charlie Montoyo said. "His command is great. When you throw strikes, you're going to get people out. When you throw 95, 96, 97, that helps."

"When you're playing a hot team, you've got to play your `A' game, and it hasn't been our `A' game," Montoyo said. "We've played well but not a perfect game."

After Anthony Castro (0-1) intentionally walked Brandon Lowe with a runner on second and one out in the eighth, Margot singled to put the Rays up 2-1.

Castro was reinstated from the 10-day injured list before the game after being sidelined by a right forearm strain.

Zunino tied it at 1 in the fifth on his 11th homer.

Vladimir Guerrero Jr. drew a two-out walk off McClanahan in the first and scored on Teoscar Hernandez's double. Hernandez has 20 RBIs in 21 games since returning from the COVID-related IL.

Tampa Bay had a streak of scoring seven runs or more in six straight games end. The Rays had also had hit three or more homers in five consecutive games, which was one away from the longest streak in major league history of six set by the 1987 Baltimore Orioles.

When Rays 1B Ji-Man Choi struck out swinging in the fifth, he lost control of his bat and it wound up in shallow right field.