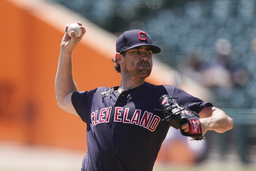 DETROIT (AP) The Cleveland Indians were on the right side of this no-hit bid.

Shane Bieber couldn't complete it, but his outstanding performance boosted a pitching staff that could use a lift.

Bieber struck out 12 in seven one-hit innings, and the Indians beat the Detroit Tigers 5-2 on Thursday. Cleveland has been no-hit twice this season, but this time it was Bieber who made it to the seventh before Jonathan Schoop led off with a home run to left.

"Generally I give up a hit in like the first inning and kind of get it over with nice and early," Bieber said. "Tried to extend it as long as possible. I was just having fun with it."

Eddie Rosario homered for the Indians, who helped Terry Francona to his 700th victory as Cleveland's manager. Only Lou Boudreau (728) and Mike Hargrove (721) are ahead of him in franchise history.

"I love it here. I don't need a certain amount of wins to verify how I feel here. I enjoy the people," Francona said. "I think as you get older, sometimes numbers start cropping up - some that you don't want and some that are OK."

The Indians recently lost right-hander Zach Plesac to a broken thumb, but Bieber looked like every bit of an ace Thursday.

Matthew Boyd (2-6) allowed four runs and six hits in five innings for the Tigers, who have lost five of six.

Bieber was trying to pitch the seventh no-hitter in the major leagues this season, which would have tied for the most since 1900 and been one shy of the mark set in 1884. It would have been Cleveland's first since Len Barker threw a perfect game on May 15, 1981.

The Indians have the longest current no-hitter drought in the majors, although Cleveland has been on the other end of two of them this season - by Carlos Rodon of the Chicago White Sox and Wade Miley of the Cincinnati Reds.

Bieber, the reigning AL Cy Young Award winner, allowed only one flyball out. He did have four walks, however.

"We understand we've got to find a way to scratch and claw and stay in the game," Tigers manager A.J. Hinch said. "We're still only a couple swings away."

Harold Ramirez drove in runs with a first-inning double and a sixth-inning single. Rosario added a two-run homer in the sixth to make it 4-0.

Rosario hit an RBI double in the ninth, and Detroit's Victor Reyes hit a run-scoring triple in the bottom of the inning.

Detroit had 47 swings against Bieber and missed on 24 of them, according to Statcast.

"He's special. He's a really good pitcher," Schoop said. "You know you are facing one of the best pitchers in the game and you've got to grind him out. Just try to get a pitch and put a good swing on it. He doesn't give you mistakes and even when he does give you a mistake he can still get away with it. He's that good."

Tigers: Detroit starts a home series against the New York Yankees on Friday night. RHP Casey Mize (3-3) starts for the Tigers against RHP Gerrit Cole (6-2) in a matchup of former No. 1 overall draft picks.