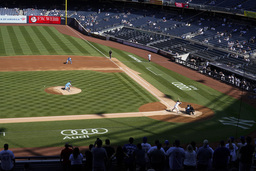 NEW YORK (AP) A poised and confident Alek Manoah dominated the Yankees with six innings of two-hit ball to win his major league debut, and the Toronto Blue Jays beat the New York 2-0 on Thursday in a doubleheader opener.

Marcus Semien and Bo Bichette hit back-to-back homers in the third inning off Domingo German (4-3), and Toronto improved to 6-3 against the Yankees this season by winning the makeup of Wednesday night's rainout.

A 23-year-old right-hander selected 11th in the 2019 amateur draft, Manoah (1-0) was brought up after throwing only 35 professional innings in the minor leagues.

His mother Susana, wearing a white Blue Jays jersey with her son's name and with her son's name on the back, was part of a cheering section that stood out among the sparse crowd for the late-afternoon start and was visible crying when he faced AL batting champion DJ LeMahieu to start his big league career. She later blew her son kisses from the stands.

"I think everyone was hearing the Manoahs today," the pitcher said with a chuckle.

Manoah became the the second Blue Jays starting pitcher to throw six scoreless innings in his debut after Mauro Gozzo in 2019.

"I just want to take it all in, and just really enjoy the moment," Manoah said. "Obviously. there's another outing in five days, so I got to get ready for that, but just for today, just want to hug my whole family and I think that's what I'm going to enjoy the most ,is how many people came out to see me, called off (work) sick, made excuses whatever the case may be. They made sure to be here, so I think that's what I'll remember the most."

Manoah, a burly 6-foot-2, 260 pounds, wore jersey No. 6, his Triple-A number, and a favorite of his because LeBron James wore it with the Miami Heat.

Manoah walked LaMahieu on four pitches but then struck out Rougned Odor on three pitches, the last a changeup. Aaron Judge swung so hard in missing a 3-1 fastball that he fell, then was way behind in striking out on a 97.3 mph full-count pitch, Manoah's fastest of the game.

"I think those first four pitches were the most nervous, most excitement I had all day, and then after those four, I was kind of like I don't want to suck," Manoah said. "So let's lock it in right here and let's start pitching. Forget about everything else, we got to pitch."

Manoah allowed singles to Miguel Andujar in the second and fifth inning. He struck out seven and walked two, throwing 60 of 88 pitches for strikes and getting 10 swings and misses. He threw 30 fastballs, 26 sliders, 19 sinkers and 13 changeups.

Jordan Romano worked a 1-2-3 seventh for his second save, finishing a two-hitter in the seven-inning game under pandemic rules. New York did not advance a runner past first base as the Yankees were blanked for the second time this season. Toronto pitched its fourth shutout.

Semien and Bichette gave the Blue Jays a 2-0 lead by hitting 374-foot homers in a four-pitch span.

Semien hit his 13th homer by lining a 2-1 fastball to left and Bichette followed with his 10th by driving a 1-1 changeup to left.

German allowed two runs and three hits in 5 2/3 innings, dropping to 4-1 in seven starts since he was recalled on April 22.

The Yankees lost their second straight after a six-game winning streak. New York had been 8-0-2 in its previous 10 series since getting swept at home by Tampa Bay April 16-18.

Jordan Montgomery (2-1) started the second game for the Yankees, the series finale, and Robbie Ray (2-1) for the Blue Jays.

Blue Jays: OF George Springer (strained right quadriceps) caught fly balls and threw to bases. Manager Charlie Montoyo said it was the best Springer has felt since injuring his quad but did not say what the next step would be. Springer has been limited to four games due to the injury. ... RHP Travis Bergen (left shoulder impingement) was placed on the injured list, retroactive to May 24. ... LHP Tommy Milone (shoulder inflammation) was transferred to the 60-day IL. .... RHP Anthony Kay (blister) who was optioned last week to Triple-A Buffalo was placed on the injured list and is expected to start a rehab assignment Sunday.

Yankees: RHP Corey Kluber (sprained right shoulder) was placed on the injured list and was awaiting a second opinion. He exited Tuesday's game with right shoulder tightness and is expected to miss two months. ... 1B Luke Voit (oblique strain) was placed on the injured list. ... DH Giancarlo Stanton (strained left quadriceps) could be activated for Friday's series opener in Detroit. ... LHP Zack Britton (bone spur in left elbow) will start a rehab assignment Saturday for Double-A Somerset. ... RHP Luis Severino, who had Tommy John surgery on Feb. 27 last year, threw about 35 pitches to hitters Wednesday and is getting close to starting a minor league rehabilitation assignment. . OF Estevan Florial and RHP Albert Abreu were recalled from Triple-A Scranton/Wilkes Barre to replace Kluber and Voit.