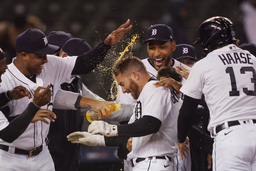 DETROIT (AP) Robbie Grossman and Justin Wilson were both drafted by the Pittsburgh Pirates in 2008. Grossman said they were even roommates at an instructional league.

So when Grossman stood at the plate and Wilson on the mound in the 10th inning, there was plenty of familiarity.

"I've faced him before, I know what he's got," Grossman said. "I kept telling myself we're just one swing away from winning this game."

Grossman hit a two-run homer in the bottom of the 10th to give the Detroit Tigers a 3-2 victory over the New York Yankees on Friday night. The Yankees took the lead in the top of the inning when automatic runner Aaron Judge came home from third on a passed ball. Wilson retired the first two Detroit batters in the bottom half, but on a full count, Grossman sent a high drive that cleared the fence in left field.

Yankees closer Aroldis Chapman returned from a non-coronavirus illness and pitched a scoreless ninth, but manager Aaron Boone opted against using the left-hander for a second inning. Wilson (1-1) was one out from securing a save, but instead the homer increased his ERA to 6.08 on the season.

"Any time you're not pitching well, it's not easy," Wilson said. "I'm mentally tough. I've done it for a while, so I know what I can do. I just need to get back on the right track."

Rougned Odor homered and had four hits for the Yankees, who dropped an odd game that also included a three-ball walk for New York hitter Gio Urshela.

Each starting pitcher - Gerrit Cole for New York and Casey Mize for Detroit - was a former No. 1 overall draft pick. Mize, the top pick in 2018, allowed a run and five hits in five innings. He struck out seven with no walks.

Cole was picked first overall by Pittsburgh in 2011. He's allowed two or fewer earned runs in 10 of 11 starts this season. He allowed a run and six hits in six innings Friday.

Detroit took a 1-0 lead in the third on Jeimer Candelario's RBI single. Odor tied it when he led off the fifth with a homer.

The Yankees had two men on later in that inning, but Mize struck out DJ LeMahieu and Giancarlo Stanton to end the threat - the third time he'd struck out each of those two hitters at the top of the New York lineup.

Stanton struck out four times in all, going hitless in his first game back from the injured list. He'd been out because of a strained left quadriceps.

"The in-between-pitches adjustments, I wasn't as fast as I usually am, from being down a couple weeks," Stanton said. "Just the mental part of getting back in and making the quick little adjustment."

Candelario reached base for a 24th straight game.

Urshela was the beneficiary of a mix-up over the count in the sixth, drawing a walk after only three balls. After he fouled off several 2-2 pitches, the next offering from Kyle Funkhouser was way outside and went to the backstop. Urshela tossed his bat aside and headed to first. Nobody from the Tigers appeared to argue.

The Yankees did not end up scoring in the inning. Vic Carapazza was the plate umpire.

The passed ball in the 10th nearly cost Detroit. So did a pair of wild pitches by Gregory Soto in the ninth, which enabled pinch-runner Tyler Wade to take second and then third. He was stranded there when Stanton and Judge both struck out.

Yankees: Stanton played for the first time since May 13.

Tigers: Manager A.J. Hinch said he wants to be conservative with RHP Jose Urena (forearm) - particularly with a couple games coming up in Milwaukee, where pitchers have to bat.

The Tigers send RHP Spencer Turnbull (3-2) to the mound against RHP Deivi Garcia (0-1) of the Yankees on Saturday.