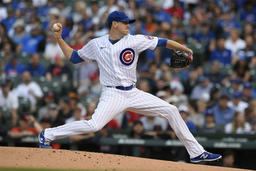 CHICAGO (AP) Kyle Hendricks isn't all that interested in labels. The results are what matters to him, and he sure is on quite a roll.

Willson Contreras and Patrick Wisdom also went deep, and the Cubs won for only the third time in nine games.

Hendricks (10-4) extended the best streak of his career and the longest by a Cubs pitcher since Jake Arrieta won nine consecutive starts to bridge the 2015 and 2016 seasons.

The right-hander scattered four hits and struck out five without a walk. He also tied Cleveland's Aaron Civale for the major league lead in wins.

"I feel pretty good, but there's still more left in there," Hendricks said. "Last start and this start, mentally, is the best I've been all year. But again, it's just putting it all together."

Hendricks hasn't lost since Pittsburgh beat him on May 9. His ERA has plummeted from 6.23 to 3.84 in that span. And if there were any doubts about whether the Cubs had a true ace after trading Yu Darvish to San Diego in the offseason, Hendricks is doing what he can to erase them - whether he cares about that tag or not.

"We don't really love the labels," Hendricks said. "I really just want to be that consistent guy every fifth day, every time I take the ball, so my teammates know what they're gonna get."

It didn't hurt that that the Cubs perked up at the plate. Held to 14 runs over the previous eight games, they broke out in a big way.

Bryant - who was 7 for 57 over the previous 17 games - made it 1-0 in the fourth when he connected against rookie Eli Morgan (0-2) for his first home run since June 4 at San Francisco. The drive to about the second row in center field ended a career-worst stretch of 48 at-bats without an extra-base hit.

"I feel like he's in a really comfy place," Cubs manager David Ross said. "I get to watch these guys so much, you can see when their timing is on and off. It looked like (Monday) he got back to the guy that was taking really good swings and seeing the ball really well."

The Cubs broke the game open with four in the sixth.

Joc Pederson chased Morgan with a two-run double with none out. Javier Baez - pulled the previous night by Ross because of a baserunning lapse - lined a ground-rule RBI double to left against Nick Sandlin. Contreras then singled in a run to make it 5-0. He and Wisdom added back-to-back solo homers in the eighth.

Cleveland, which had won six of eight, got its run in the top half on a forceout by Amed Rosario after loading the bases with none out.

Morgan gave up four runs and four hits in his third big league start. The 25-year-old right-hander struck out nine and walked none.

"I was cruising through five," Morgan said. "In the blink of an eye, I'm out of the game with three more runs on the board. That's something I have to continue to get better at, making sure that I have a game plan for each inning, for each batter and finding a way to be my sharpest from pitch 1."

Indians: Civale appears headed to the injured list because of soreness in the middle finger on his pitching hand. He is scheduled to be examined by hand specialist Dr. Thomas Graham on Wednesday. "My guess is we will need to make a roster move," manager Terry Francona said. "Because of tomorrow's day off, we can let him get looked at first. But I think we're prepared that he's going to miss some time." ... C Roberto Perez (fractured ring finger) is set to begin a rehab assignment with Triple-A Columbus on Wednesday.

Cubs: Wisdom was examined by the trainer after checking his swing in the second inning, then lined to third.

Cubs: RHP Zach Davies (4-4, 4.66) looks to bounce back as the Cubs open a four-game series against the Los Angeles Dodgers on Thursday. Davies was pounded for eight runs in a loss to Miami last week after delivering back-to-back scoreless outings in winning his previous two starts.