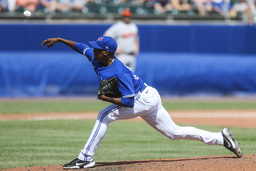 The Blue Jays tallied 12 hits in closing out a four-game series with their seventh win in eight games. Five of those victories came against the Orioles, who have dropped 16 of 18.

Toronto got two hits apiece from Guerrero, Cavan Biggio, Marcus Semien, Teoscar Hernandez and Reese McGuire. It was the Blue Jays' 34th game with 10 or more hits, matching the Astros for most in the majors.

"The whole clubhouse has just great energy," said McGuire, who is 16 for 30 at the plate over his past 10 games. "The guys are excited to show up every day and just expecting to win."

"We have a chance when he takes the mound," Blue Jays manager Charlie Montoyo said. "It's funny because he wasn't really sharp today, but he did the job."

Stripling felt he was "not necessarily super sharp" pitching into swirling winds blowing off of Lake Erie, but he was pleased with the result.

"To go five innings, two runs, get the win, I'm certainly not going to complain," Stripling said. "But against maybe some tougher lineups, you usually have to have better stuff than that."

Patrick Murphy replaced Stripling with runners on the corners and escaped the jam with a strikeout and a double-play grounder. Tim Mayza got out of a bases-loaded jam in seventh, Anthony Castro struck out the side in the eighth, and Jordan Romano got three outs for his sixth save.

"If our bullpen regroups and does the job like we did today, we are going to win games," Montoyo said. "Because we are going to hit. We are playing great defense. Our starters are doing a great job. So that's the piece that we're kind of missing."

Guerrero's two-run double in the third gave the Blue Jays a 3-1 lead. Guerrero then appeared to score from second on Biggio's base hit, but Austin Wynns tagged Guerrero's hand just before he brushed home plate, and the call was overturned by a video review.

Baltimore got one back on Ramon Urias' RBI double in the fifth, but Biggio made it 5-2 when he doubled home Guerrero and Hernandez in the bottom half.

"Honestly, only giving up five runs with the way the wind was today, blowing straight out to left field, you expected this would be more of a high-scoring ballgame," Orioles manager Brandon Hyde said. "But we had a tough time scoring runs."

Ryan Mountcastle hit his 13th homer in the first, breaking a streak of five games without a homer for the Orioles, their longest in nine seasons.

"That was a really good at-bat," Hyde said. "Deep in the count, foul balls and then got something that he could hit and put a good swing on it."

Five Blue Jays advanced to the second round of fan voting to determine starters for the All-Star Game at Coors Field on July 13. Toronto's finalists are: first baseman Guerrero, who led all players with more than 2.7 million votes, second baseman Semien, the AL vote leader at his position, shortstop Bo Bichette, left fielder Hernandez and center fielder Randal Grichuk.

Baltimore called up infielder Domingo Leyba, outfielder Ryan McKenna and infielder Urias to fill out the lineup, and optioned right-hander Konner Wade and infielder Stevie Wilkerson to Triple-A Norfolk. Joining them in Norfolk will be right-hander Mickey Jannis, who cleared waivers after he was designated for assignment on Friday.

Orioles: SS Freddy Galvis was placed on the 10-day injured list with a right quadriceps injury after he got hurt running out a bunt single in Saturday's game. Galvis could be out for a month or two, Hyde said. . 1B Trey Mancini, back this season after treatment for colon cancer, was held out for "a little breather," Hyde said, but he pinch-hit in the eighth. . Mullins had a scheduled day off but pinch-hit in the ninth.

Blue Jays: Following an off day, they begin a three-game series against Seattle on Tuesday night.