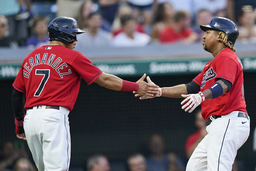 CLEVELAND (AP) There were stitches in Ernie Clement's chin, and the Indians rookie infielder already felt scarred by an on-field accident he couldn't avoid.

Clement was down. Josh Naylor's words picked him up.

"He just told me to play my heart out," Clement said.

A day after being shaken by Naylor's grisly leg injury in Minnesota, the Indians bounced back with a 13-5 rout of the Detroit Tigers on Monday night. Jose Ramirez homered and drove in five runs, Austin Hedges hit a two-run shot and Clement got two hits and scored three times.

On Sunday, Naylor severely broke his right ankle in a violent collision with Clement, who felt some guilt before exchanging text messages from his injured teammate.

"The words of encouragement from Josh, that meant the world to me because I was involved in that accident and it was really hard," Clement said. "But you know there is nobody that wanted to be out on that field than Nails tonight, so I just wanted to play my heart out like he told me."

Naylor will undergo surgery and likely miss the rest of the season.

The 24-year-old's hustle and positive energy will be tough to replace, but the Indians, who were rattled by seeing him writhe in pain in the outfield grass, have managed to stay competitive despite key injuries to ace Shane Bieber and others.

"Life, and baseball seem to keep challenging us," Hedges said. "Right when we think something's going good, another thing kind of happens. But I mean, it's why you got 26 guys and you got a 40-man (roster). You got guys that come up and its their job to come in and pick that guy up that's lost."

Ramirez connected for a three-run drive in the fourth inning off rookie Matt Manning (1-2) and the Indians opened a seven-game homestand with a season-high in runs and hits (19).

Detroit's Miguel Cabrera connected for his 493rd homer, tying him with Lou Gehrig and Fred McGriff for 28th on the career list. Eddie Murray is next with 504.

Staked to a healthy, early lead, Indians rookie Eli Morgan (1-2) held the Tigers in check for five innings to get his first big league win. Afterward, Morgan was mobbed by his teammates in the clubhouse.

"The guys were stoked for me, as we should be," Morgan said. "We put a stomping on them today. It was a really fun day at the ballpark. It was great to get a win after yesterday. Our thoughts are still with Josh.

"That was something really tough to watch. I can't imagine being in his shoes, feeling that. So it was really good for us as a team to come out and get a really good W today."

Hedges put the Indians ahead 5-1 in the second with his fourth homer, a towering two-run shot to left off Manning that barely cleared the 19-foot high wall. Bradley Zimmer's RBI single earlier in the inning made it 3-1.

In the fourth, Ramirez followed a double by Cesar Hernandez and Rosario's third single with his 17th homer to put the Indians ahead 9-2.

The Indians pounced on Manning for two runs in the first as Ramirez hit an RBI groundout and Eddie Rosario delivered a sacrifice fly.

"They had comfortable swings against him and hit the ball hard," Hinch said. "It looked like he was missing locations and a little predictable."

Bieber will undergo another scan on his sore shoulder later this week. The AL's reigning Cy Young winner was shut down on June 14 after complaining of tightness following a start.

Francona said Bieber was examined by a team physician on Monday "and they were both pretty pleased with it."

Tigers: Hinch said RHP Michael Fulmer's soreness appears to be isolated to his neck, which would rule out any shoulder problems. He was placed on the injured list Sunday and will undergo more tests this week. ... LHP Matthew Boyd (arm discomfort) and SS Niko Goodrum (sprained finger) played catch in their first on-field activities since going on the injured list.

Indians: Slugger Franmil Reyes (oblique strain) and catcher Roberto Perez (finger surgery) took batting practice before the game. Reyes will play three consecutive games at Double-A Akron this week, and as long as there are no setbacks, he'll be activated Saturday. Perez will likely come off the injured list when he's eligible on July 3.

Rookie RHP J.C. Mejia (1-2) starts for the Indians against RHP Jose Urena (2-8), who has lost his last four starts.