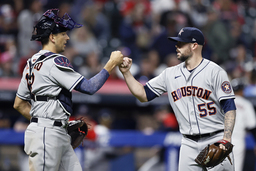 Houston came to town having lost five of six, including a three-game sweep at home to Baltimore, but have looked like the team that won 11 in a row before hitting the rough patch.

"We scored early and we held on," Houston manager Dusty Baker said. "That was a big game for us to win."

The Indians, who have lost six of seven, added third baseman Jose Ramirez to their injury list that gets longer each day. He was scratched shortly before the game because of a sore left elbow that occurred diving for a ball Thursday. Ramirez returned after missing a game Wednesday when he fouled a ball off his left cheek.

"He has a pretty good bone bruise, so when he gets to extension in his swing, it was kind of grabbing at him a little bit," Indians manager Terry Francona said. "He got treatment pretty much most of the night. We'll see how he shows up tomorrow."

Lance McCullers Jr. (6-1) won his fifth straight decision. The right-hander was charged with two runs in 5 2/3 innings. McCullers was pulled with two runners on in the sixth and Cesar Hernandez followed with a three-run homer off Brooks Raley.

The Indians loaded the bases against Blake Taylor with two outs in the eighth, but Harold Ramirez struck out. Ryan Presley allowed a leadoff single in the ninth, but recorded his 13th save in 14 chances.

"Those losses against Baltimore were not ideal but we've been playing good baseball and we're back to winning ballgames," McCullers said.

Designated hitter Franmil Reyes was activated Friday after being out since May 23 with a strained oblique and was 3 for 5. Oscar Mercado also had three hits but the Indians left 15 runners on base.

"That's a hard way to play against the Astros," Francona said. "They didn't give in. We stranded a ton of runners and that's not what we're shooting for."

Houston scored two runs in the second and four times in the third off starter Sam Hentges (1-3), who allowed six runs in 2 2/3 innings.

The Progressive Field fans continued to boo Jose Altuve and his teammates. Altuve, who hit a grand slam in Thursday night's win, got his team going in a different manner when he pushed a bunt past Hentges to lead off the third.

Altuve stole second and scored on Correa's double inside the right-field line. Houston sent nine batters to the plate and led 6-0 by the end of the inning.

The Astros didn't miss designated hitter Yordan Alvarez, who blasted a 446-foot home run into the center-field bullpens Thursday. Alvarez was placed on the paternity list, but Taylor Jones, called up to take his place, had two hits, including an RBI double in the second. Chas McCormick drove in two runs.

Left fielder Eddie Rosario was also out for the Indians after leaving Thursday's game with right abdominal tightness.

Indians outfielder Josh Naylor had surgery Friday for multiple leg fractures and torn ligaments sustained in a collision with teammate Ernie Clement Sunday at Minnesota. Naylor is expected to miss the rest of the season.

Naylor's brother, Bo, who plays for Cleveland's Double-A affiliate in Akron, drove Josh to the Cleveland Clinic at 6 a.m. Friday. Bo Naylor said several family members are in town to support his older brother in his recovery.

"I've gotten to talk to him on the side and he's driven, man." Bo said. "He's gonna have my family, the fans, everyone else behind him. He's ready. He's ready, for sure."

The Astros are 50-33 and own the second-best record in the AL, but won't have any starters in the All-Star Game.

"I just hope these guys these guys make the team as backups because they certainly deserve it," Baker said. "I haven't heard anybody complain. These guys, one thing I love about them is that they don't complain about anything."

Astros: 3B Kyle Tucker was removed from the lineup because of back spasms.

Indians: C Roberto Perez, who had finger surgery May 7, is expected to be activated Saturday.