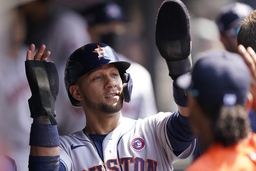 CLEVELAND (AP) Yuli Gurriel scored on a two-out error by pitcher Emmanuel Clase in the 10th inning, allowing the Houston Astros to beat the skidding Cleveland Indians 4-3 and complete a four-game sweep on Sunday.

Gurriel advanced to third on a fielder's choice by Jason Castro, then came around when the Indians failed to complete a double play on the throw back to first by Amed Rosario.

The shortstop forced out Carlos Correa at second base, but Clase mishandled his return throw, allowing Castro to be safe and Gurriel to scamper home. Gurriel struck out leading off the inning, but reached first on Clase's wild pitch.

"It was really wild, that 10th inning," Astros manager Dusty Baker said. "One-run games are so very, very, very important to win and we squeaked that one out. This was a big weekend for us and today was a very good day."

Astros rookie Chas McCormick homered and had three RBIs for Houston, which has won 25 of its last 34 games and swept the Indians for the first time in franchise history.

Blake Taylor (1-2) retired all four batters he faced in relief of starter Zack Greinke, and Brooks Raley earned his second save with a scoreless 10th. Astros closer Ryan Pressly was unavailable after pitching in the first three games of the series.

"That play in the 10th was crazy and it was nice that it worked out our way," Greinke said. "It was a battle of the depth these teams have over the last four games."

Clase (3-3) took the loss despite not allowing a hit or walk and striking out three in two innings. Cleveland has dropped a season-high six straight and is 1-8 since June 25.

Greinke worked 7 2/3 innings, allowing three runs and five hits. He struck out eight. The right-hander was staked to a 3-1 lead, but allowed a solo homer to Eddie Rosario in the sixth and a tying shot by Cesar Hernandez in the eighth.

The Indians didn't manage a hit out of the infield until Eddie Rosario cleared the wall in right. Greinke, whose last loss occurred May 25, remains tied for 83rd on the career wins list with 216.

"Zack is still changing speeds and commands everything he throws," Cleveland manager Terry Francona said. "And even though he's not lighting up the radar gun like he used to, it's very impressive."

McCormick gave Houston a 3-1 lead in the sixth with a two-run homer, scoring Correa and chasing Cleveland starter Cal Quantrill, who gave up three runs in a season-high 5 1/3 innings.

Indians third baseman Jose Ramirez missed his third game in a row with a sore left elbow. Ramirez was hurt diving for a ball Thursday in the series opener, one day after fouling a pitch off his left cheek against Detroit.

Cleveland reached the midpoint of its season with a 42-39 record.

Astros 2B Jose Altuve, OF Michael Brantley, SS Carlos Correa and RHP Ryan Pressly were named to the AL All-Star team, along with Indians 3B Jose Ramirez and RHP Shane Bieber.

Bieber was the MVP of the 2019 All-Star Game in Cleveland, but will not play at Colorado's Coors Field after being temporarily shut down with a shoulder injury last month.

"I guess, technically, I held the award for two years because there wasn't an All-Star Game last year," Bieber joked. "I've never been to Denver, so I'm really looking forward to hanging out with Jose there."

Baker spent Saturday afternoon at Cleveland's most popular tourist destination, the Rock and Roll Hall of Fame. "It was cool as heck," he said. "They took me back to the off-limits area where we had to put on gloves to touch anything." Baker said he most enjoyed seeing Billy Preston's shoes, Christine McVie's shawl, Ray Charles' jacket and Grace Slick's dress in the climate-controlled archives.

Astros: Brantley (right side discomfort) and OF Kyle Tucker (back spasms) were not in the lineup after being late scratches earlier in the series. Baker was unsure if they will be available when Houston returns to action Tuesday at home.

Indians: Bieber (right shoulder strain), who was placed on the 10-day injured list June 14, said his shoulder is "feeling really good, but we're taking it day by day." The 2020 AL Cy Young Award winner has not been cleared to resume throwing.