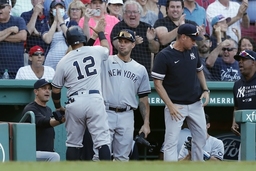 Gleyber Torres added a go-ahead, bloop single for the Yankees, who posted just their third victory in 12 games this season against their longtime rivals.

The Red Sox, who had won four in a row, put runners on second and third with two outs in the ninth before Aroldis Chapman struck out Kike Hernandez for his 18th save.

New York can earn a split of the four-game series Sunday at Fenway Park. The Yankees, who could have fallen double-digit games out of first place in the AL East, moved within eight games of the Red Sox.

Boston starter Nathan Eovaldi was breezing along, throwing a shutout with two outs in the eighth before he was lifted after Brett Gardner's RBI single.

"Yeah, that was a good one. No question about it," Yankees manager Aaron Boone said. "Eovaldi held us down a good portion of the day and all of a sudden we get the lead."

It's the first time the Red Sox have lost with a lead of more than two runs this season.

"It's a tough one,'" Red Sox manager Alex Cora said. "One of those that's disappointing but we'll move forward."

Adam Ottavino (2-3) relieved and allowed Giancarlo Stanton's bloop, ground-rule double. Odor drove his tying hit off the Green Monster and Torres followed a single that dropped in down the right-field line.

"I think if you see my body language during the game, it was pretty clear I was stung by the whole ordeal," Ottavino said of the two bloop hits.

"I thought I did a good job of minimizing it early," said Taillon, who gave up a run in each of the first three innings. "I'm not shocked we were able to string something together when Eovaldi was out."

Eovaldi struck out eight and was charged with two runs, without issuing a walk. He threw 82 of his 100 pitches for strikes.

"I feel like I made a few mechanical adjustments to help with my timing," said Eovaldi of his ball/strike ratio. "I feel like that showed today."

Taillon had given up just three earned runs in three career starts against the Red Sox. They took advantage of Odor's two errors, scoring three against him in the initial three innings.

"This is a good one," Boone said. "We've had more than our share of gut punches the last month or so."

DJ LeMahieu went 1 for 5 with a double, extending his consecutive on-base streak to 34 games, matching the longest single-season string by a Yankees player since Hall of Famer Derek Jeter's in 2012.

Yankees: Boone hopes that C Gary Sanchez, who left Friday's game with mid-back spasms, will be back in the lineup Sunday. Boone said he was getting treatments and doing "a little better." . RHP Luis Severino threw 38 pitches off the mound Saturday. The club will decide if he'll throw a simulated game or make a rehab start in the next few days. . Boone also said 3B Gio Urshela (COVID-19 IL) could be activated Sunday. . OF Aaron Judge and C Kyle Higashioka, both on COVID-19 IL, are expected to join the team in Boston on Sunday and fly for the series on the road against Tampa Bay.

Red Sox: Cora said LHP Eduardo Rodriguez, who left his start Friday in the second inning with migraine symptoms, "was feeling better" after exchanging texts with him. Cora doesn't think it'll land him on the injured list. . LHP Chris Sale, working back from Tommy John surgery, is slated to make his second rehab start for Double-A Portland on Sunday. He went 3 2/3 hitless innings, hitting 98 mph with the Sea Dogs on Tuesday.