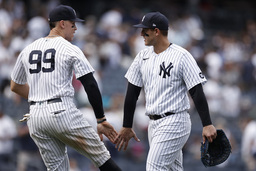 Aaron Judge and Rougned Odor homered and the Yankees capitalized on a three-base error by right fielder Mitch Haniger to win for the 10th time in 12 games.

New York erased a 4-1 deficit by scoring four times in the sixth inning. The Yankees have won the first three in a four-game series against Seattle in a matchup of teams in the playoff chase.

Odor hit a two-run drive inside the right field foul pole to pull the Yankees within 4-3 in the sixth.

With one out, pinch-hitter Gleyber Torres hit a fly and Haniger raced back, appeared to overrun it and then slipped, allowing the ball to get to the warning track.

Higashioka delivered a tying, pinch-hit double with one out and took third on LeMahieu's single off Casey Sadler (0-2).

Anthony Rizzo followed with a sharp grounder to first baseman Ty France, who stepped on the bag. Higashioka broke for home while France focused on LeMahieu, who alertly stopped first and second. LeMahieu forced a rundown and was tagged out after Higashioka had crossed the plate for the tiebreaking run.

"LeMahieu's pretty shifty," Judge said. "People may not know it, but he's got some agility and he's pretty quick. He stayed it in long enough for us to get that run and get the win. That was big time. It's little plays like that kind of go unnoticed at times but make the big difference in the long haul."

"It's kind of a tough play for the first baseman there, so I was just kind of using instincts there," the soft-spoken LeMahieu said.

The Mariners fell to 3-6 on a 10-game trip and each loss has been decided by no more than two runs.

"A couple of miscues today hurt us and when you're playing a talented team like this in this ballpark, it can catch you and that's what it did today," Seattle manager Scott Servais said.

Andrew Heaney (7-8) settled down after a rocky beginning for his first win since being traded from the Los Angeles Angels to the Yankees. He allowed four runs and four hits in six innings with nine strikeouts and three walks.

After allowing four solo homers in his debut Monday against Baltimore, Heaney settled in nicely after the Mariners took a 4-1 lead in the second.

"The first two innings were terrible and I don't want that to be any indication of what I can do here," Heaney said.

Kyle Seager hit Heaney's curveball into the right field seats over the short porch for a 2-0 lead four batters in. The Mariners scored twice in the second on a bases-loaded walk by Abraham Toro and a bases-loaded sacrifice fly by Haniger.

Haniger's drive nearly allowed the Mariners to take a big lead but Giancarlo Stanton, in his second start in right field, made a leaping catch. After Stanton's catch, Heaney retired 13 of the final 15 hitters and ended his outing by striking out the side in the sixth.

Clay Holmes followed Heaney by getting three of his four outs on strikeouts and Joely Rodriguez got the final two outs of the eighth.

Jonathan Loaisiga pitched a perfect ninth for his fourth save in place of Aroldis Chapman, who was put on the injured list before the game with left elbow inflammation.

Mariners: SS J.P. Crawford (illness) was held out of the lineup. It was the second game he missed this year and first since May 23. . LHP Justus Sheffield (strained left forearm) was scratched from his scheduled rehab start on Sunday at High-A Everett because he did not feel great after his recent throwing session.

LHP Yusei Kikuchi (7-6, 3.89 ERA), who took a no-hitter into the sixth inning in his only previous appearance at Yankee Stadium on May 8, 2019, starts for Seattle. Rookie Luis Gil (1-0, 0.00) makes his second career start for New York five days after throwing six shutout innings his debut against Baltimore.