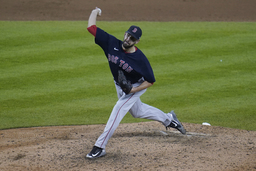 TORONTO (AP) Jonathan Arauz singled home the tiebreaking run in the eighth inning and the Boston Red Sox beat Toronto 2-1 Saturday night to split a doubleheader with the Blue Jays.

Matt Barnes (6-3) worked one inning for the win and Adam Ottavino finished for his eighth save in 12 opportunities as the Red Sox won for the second time in their past 10 games and snapped Toronto's season-high five-game winning streak.

"This win was huge," said Boston's Alex Verdugo, whose sixth-inning homer tied the score at 1-all. "It's big to come out here and win a game like that, and kind of try to get the momentum going back on our side."

Toronto won the opener 1-0 when Marcus Semien led off the bottom of the seventh by connecting on the first pitch from Barnes (5-3). It was Semien's 26th home run of the season and the first game-ending homer of his career.

The Blue Jays are 8-2 since returning to Toronto July 30. Jordan Romano (5-1) earned the win in the first game with a scoreless inning of relief.

"We only scored two runs today so I feel good that we split," Blue Jays manager Charlie Montoyo said. "The pitching today was really good for both sides. There's nothing wrong with splitting when you only score two runs."

Before the opener, Boston put slugger J.D. Martinez on the COVID-19-related injured list. The Red Sox have scored five runs or fewer in 15 consecutive games.

Making his second start for Toronto, right-hander Jose Berrios allowed one run and five hits in the second game of the doubleheader. He walked none and struck out six.

Berrios had pitched 11 consecutive scoreless innings to begin his Blue Jays career but gave up Verdugo's homer in the sixth. The homer was Verdugo's 11th.

"That's a big swing," Boston manager Alex Cora said. "It's a game-changer. You could feel it in the building a little bit."

A walk and a single gave Boston men at first and second with nobody out against right-hander Trevor Richards in the seventh, but the threat fizzled when both runners were thrown out.

First, Marwin Gonzalez got caught in a rundown between second and third after Franchy Cordero whiffed on a sacrifice bunt attempt. Cordero later struck out as part of a double play, with Christian Vazquez thrown out attempting to steal third.

Asked about the baserunning blunders, Cora said he didn't want to dwell on them Saturday.

"I'll talk to them tomorrow," he said. "Let's celebrate this one. I promised myself that I'm not going to look back at that one."

Toronto's Vladimir Guerrero Jr. hit a deep drive to center off Barnes in the bottom of the seventh but Kike Hernandez made a leaping catch at the wall.

"He crushed that ball," Cora said. "He's a special kid. I know Barnsey thought it was gone, he threw his hands up. It was a loud out. We'll take it."

Red Sox right-hander Tanner Houck started the second game and left with runners at first and second and two outs in the fourth. Left-hander Josh Taylor came on in relief and gave up an RBI single to Breyvic Valera.

Toronto failed to hit a home run in the night game, snapping a streak of 20 straight games with at least one homer.

Semien's game-winning drive in the opener was the 166th of the season for the Blue Jays, who began the day tied with San Francisco for the MLB lead.

Boston bench coach Will Venable has tested positive for COVID-19, the team said during the first game. With first base coach Tom Goodwin in quarantine after close exposure to Venable, quality control coach Ramon Vazquez coached first base. Cora and Red Sox coaches wore masks on the field and in the dugout, and some Boston reserves were also masked. "We've got to take care of our group," Cora said. "For now, we'll do our best to wear masks in the dugout and, obviously, inside."

SO CLOSE, SO FAR AWAY

This was the fourth doubleheader in Toronto since they moved into their retractable-roofed dome in 1989. The Blue Jays had swept all three previous doubleheaders, beating the Angels in 1989, Cleveland in 2001, and Kansas City in 2018.