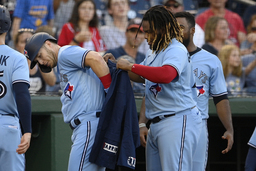 After Blue Jays starter Robbie Ray matched his career high by striking out 14 over seven innings, Tim Mayza (4-1) worked a perfect eighth and Jordan Romano finished for his 13th save in 14 chances.

"This was a huge win for us, a huge momentum swing," Ray said. "We're looking to come back tomorrow and keep building on it."

White Sox left-hander Aaron Bummer (2-5) struck out the first two batters he faced in the eighth before giving up singles to Teoscar Hernandez, pinch-hitter Breyvic Valera, and Kirk.

Jose Ruiz replaced Bummer, and Toronto loaded the bases when Lourdes Gurriel Jr. reached on an error by Yoan Moncada. Randal Grichuk followed with a four-pitch walk, making it 3-1.

White Sox shortstop Tim Anderson went 0 for 4 in his return after missing four games because of tightness in both hamstrings.

Anderson's second strikeout was the 14th for Ray, who pumped his fist enthusiastically as he hopped off the mound.

"I knew it was probably my last hitter and I just dug deep," Ray said. "I threw three really good sliders and got the punch out. I was just fired up."

The 14 strikeouts boosted Ray's season total to 192, one more than the New York Yankees' Gerrit Cole for the AL lead. Philadelphia's Zack Wheeler leads the majors with 204 after fanning 10 Tampa Bay batters Wednesday.

Ray is the first left-hander in Blue Jays history to strike out 14 in a game.

"Tonight, the confidence with the slider was there," Ray said. "I felt like I could throw it in any count at any point during any at bat and I felt like I was going toget a good result with it."

"Our game plan was to take it if we could recognize it," La Russa said. "That's easier said than done."

Chicago opened the scoring in the third when Leury Garcia led off with a single, stole second and third, and scored on a two-out hit by Moncada.

The Blue Jays tied it in the fourth on Corey Dickerson's two-out RBI triple.

White Sox right-hander Lucas Giolito allowed one run and five hits in six innings. He walked one and struck out six. Giolito has struck out 175 this season, fourth most in the AL.

Giolito called it "a grinder kind of outing."

"I didn't really have good fastball velocity," he said. "I didn't feel like I could just reach back and throw it 95 or 96 and blow someone up. It was a lot more trying to be crafty."

Ray also fanned 14 on Sept. 7, 20174, pitching for Arizona against the Los Angeles Dodgers.

Moncada's single extended his hitting streak to 12 games, the second longest streak of his career. He had a 14-game streak in 2019.

Blue Jays: OF George Springer (sprained left knee) is eligible to come off the injured list but likely won't return until the weekend, Montoyo said. . INF Cavan Biggio has been diagnosed with a sprained left elbow after he was injured diving for a ball in a rehab game at Triple-A Buffalo last Friday. Biggio went on the injured list Aug. 3 because of tightness in his back. ... The Blue Jays activated RHP Joakim Soria (right middle finger) off the injured list and optioned RHP Connor Overton to Triple-A.