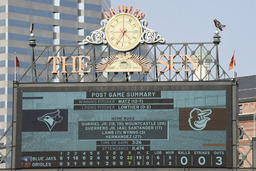 Guerrero's drive tied him with Angels two-way star Shohei Ohtani for the major league lead. Jake Lamb also homered during a 10-run third inning for the Blue Jays, who took three of the four in the series.

"The last three days, I've been in the game for 35 years, and I've never seen anything like that," Blue Jays manager Charlie Montoyo said. "I didn't know we were going to score this many runs, but at the end of August, I said we were going to get hot because we have way too many hitters. Now, we're swinging the bats great. It's contagious."

Gurriel set the franchise record with his fourth grand slam of the season and also had a two-run homer in the fifth to drive in seven runs. Danny Jansen had four hits, including three doubles, and four RBIs.

The club record for runs was set in a 24-10 thrashing of the Orioles on June 26, 1978, a game in which John Mayberry hit the Jays' only two homers and had seven RBIs after coming off the bench.

Toronto had 19 hits and improved to 80-63 after starting the day tied with the Yankees for the second AL wild card behind Boston.

Anthony Santander homered for the third time in four games and Austin Wynns had a solo shot in the seventh and finished with three RBIs for Baltimore.

"We're putting pressure on everyone else," Matz said. "We want guys to be backed into corners. In one inning, we can score 10 runs, so that's a pretty special thing."

Orioles rookie left-hander Zac Lowther (0-2) was recalled from Triple-A Norfolk on Sept. 6 to take a spot in the rotation. Lowther loaded the bases on a single and two walks in the first. He then hit Hernandez for the Blue Jays' first run. Gurriel followed with the grand slam and Toronto led 5-0.

Guerrero pushed the lead to 6-0 with a solo shot in the second.

"They're good hitters and I wasn't attacking them," Lowther said. "With a lineup like that, you have to get ahead and have to attack, and I wasn't doing it."

The Orioles pulled within 6-3 in the bottom half on a fielder's choice by Kelvin Gutierrez and a two-run single by Wynns.

The Blue Jays pulled away in the third against Spenser Watkins with a two-run double by Jansen, a single by Breyvic Valera and a solo homer by Lamb.

Toronto had an 11-run seventh inning Saturday night to rally past Baltimore and is the third team with 10-plus-run innings in consecutive games, joining the 2000 Orioles against Toronto and New York and the 1969 Astros against the Mets in both games of a doubleheader, according to Elias.

Hernandez put the game further out of reach with the grand slam.

It was the first time the Blue Jays have hit two grand slams in a game.

Mike Baumann entered and allowed a two-run double to Valera.

Blue Jays: DH George Springer was held out of the lineup one day after hitting a two-run homer that gave Toronto an 11-10 victory in the first game of a doubleheader. Springer missed three games after fouling a ball off his knee in Monday's 8-0 win over the Yankees.

Orioles: RHP Matt Harvey (right knee inflammation) was transferred to the 60-day IL. Harvey finished the season 6-14 with a 6.27 ERA over 28 starts. He is a free agent after the season.