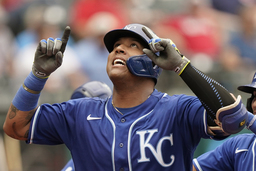 CLEVELAND (AP) Salvador Perez hit his 46th home run, breaking Johnny Bench's record for homers by a catcher in a season, and the Kansas City Royals beat the Cleveland Indians 7-2 Monday in the first game of a doubleheader.

Perez hit a two-run homer in the fifth inning, topping Bench's total from 1970 for the most by a player who played at least 75% of his team's games at catcher.

"It was unbelievable," he said. "I thank God for this. It's amazing."

Perez also moved into a tie for the major league lead in homers with Toronto's Vladimir Guerrero Jr. Perez leads the majors with 115 RBIs.

Royals manager Mike Matheny considered it an honor to witness the moment.

"It's just hard to get your head around, to be honest," Matheny said. "The long history in this game and how many great players have come through. For him to do something that nobody's done, it's amazing."

Starting again behind the plate - the durable All-Star has seen some time at designated hitter, and started the second game at DH - Perez drove a 1-2 pitch from Triston McKenzie into the left field bleachers, a drive that traveled 429 feet.

Perez pointed to the sky after crossing home plate and was hugged by several teammates as he entered the dugout.

"For a guy who's so respected in this clubhouse, it was different than your normal home run," Matheny said. "You could see the look on Salvy's face. He'll never forget it."

Perez tied Bench on Thursday night in Kansas City as the Royals played Seattle. He went 1 for 13 at the plate in the final three games of the series but didn't feel any pressure to set the record and was more focused on winning games.

"Perez is one of those rare individuals to find energy and passion just to keep playing," Indians interim manager DeMarlo Hale said. "And the offensive year he's having it's even more special. People don't talk about him in the MVP race, but I'll tell you what he's there in my book."

Perez also singled in the first and made his presence known defensively when he threw out Myles Straw trying to steal second base in the bottom of the inning.

"He's a great hitter, to start," McKenzie said. "Second of all, he's a great catcher. Threw out Straw early in the game, kind of shut down some of our momentum. He's a guy that can always make you pay for mistakes. He did just that. He's definitely caught fire toward the end of the season."

Jose Ramirez, the current AL Player of the Week, had a two-run single for Cleveland in the fifth.

The seven-inning game was the makeup of a July 11 rainout at Progressive Field.

RHP Shane Bieber is expected to rejoin Cleveland's rotation this week. The reigning AL Cy Young winner has been sidelined since June 13 with a strained shoulder. Bieber threw 57 pitches in 3 1/3 innings for Double-A Akron on Sunday.

Indians: OF Harold Ramirez injured his right shoulder when he ran into the right field wall at Yankee Stadium on Sunday and didn't play in the first game of the doubleheader.

Royals: Tuesday night starter RHP Daniel Lynch (4-5. 5.34) was pulled from his last start against Oakland in the third inning because of left calf tightness. He gave up three runs (one earned) on two hits in two-plus innings.