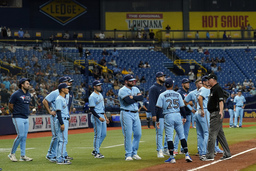 ST. PETERSBURG, Fla. (AP) Hit by a pitch two days after scooping up a Toronto scouting report and setting off a flap, Kevin Kiermaier hopes to see the Blue Jays in the playoffs.

"Oh yeah, it was intentional," Kiermaier said after reliever Ryan Borucki hit him on the back with his first pitch in the eighth inning Wednesday.

Tampa Bay's 7-1 victory clinched its third straight postseason berth. When asked why he wants to face Toronto again, Kiermaier replied: "The motivation is there. That's all that needs to be said."

"Pretty much almost went behind me," Kiermaier said. "I thought it was a weak move, to be quite honest. It's over. It's didn't hurt by any means, so I don't care. Whatever. We move on. We got a series win, and I hope we play those guys, I really do."

Borucki was ejected after the umpires met, which prompted Blue Jays manager Charlie Montoyo and enraged pitching coach Pete Walker to storm out of the dugout to argue as played spilled onto the field. Walker also was tossed, and there were no incidents between the players.

"I wanted to go down and away, as I was coming forward I felt the ball slip out of my hand and I missed up and in, and I accidentally hit him," Borucki said. "They can think want they want over there in their locker room, but it is what it is."

"I was just like, I missed arm-side, like I miss arm-side a lot," Borucki said. "I pitch inside all the time, and he was like, `You've just got to go.'"

Montoyo said Kiermaier was not hit intentionally, maintaining he didn't want to use another pitcher in the one-sided game.

"Pete's reaction told me everything about it," Montoyo said. "He missed. He hit him, but I understand what it looks like. I understood how the Rays got upset about it. That thing was on for two days."

On Monday, Kiermaier picked up a scouting card that fell off the wristband of Blue Jays catcher Alejandro Kirk during a play at the plate and refused to give it back. Cash apologized to the Blue Jays organization Tuesday and Montoyo said the matter was "agua under the bridge."

Austin Meadows hit a three-run homer during a six-run third inning for the AL East-leading Rays (94-59). The postseason berth was the third in a row and seventh since 2008 for the defending AL champions.

In the complicated math of MLB in the wild-card era, when magic numbers are not an exact formula due to head-to-head matchups among contenders to multiple beths, Cash unaware that the Rays could clinch until 45 minutes before first pitch. Lowe said he didn't realize it until the news flashed on the scoreboard at the end of the game, while Kiermaier was in the dark until seeing teammates wearing postseason "BUILT FOR OCTOBER" T-shirts leaving the dugout after the game.

Kiermaier and Cash spoke briefly during a clubhouse celebration that featured a bubbly toast.

"We watched the Dodgers run out onto the field." Lowe said. "I think everybody in that locker room knew right then and there that we belonged here, we can be here next year. We had one main goal, it's to be in the position we were last year with a different outcome."

Toronto (85-67) dropped into a tie for the second AL wild-card berth with the New York Yankees, who played later Wednesday. The Blue Jays lost two of three to Tampa Bay and are 16-5 in September.

The Rays loaded the bases with no outs in the third against Ross Stripling (5-7) before Yandy Diaz had a sacrifice fly and Meadows followed with his 26th homer. Taylor Walls added a two-run single that made it 6-0.

The Blue Jays close out the road portion of their regular season with four games at Minnesota, last in the AL Central, starting Thursday night. Then Toronto plays three with the Yankees and three against Baltimore, the team with the AL's worst record, at home to wrap things up.

The Red Sox and Yankees open a three-set Friday night in Boston. After the Toronto series, New York returns home for three with the Rays. Boston closes out the regular season with three-game road series at both Baltimore and Washington.

Rays: INF Wander Franco (right hamstring) took part in a three-inning simulated game after his scheduled game with Triple-A Durham was postponed by rain. He will play seven innings at short in Game 1 of a doubleheader and might be back Friday. ... DH Nelson Cruz (illness) was out of the lineup for the second straight game. . Reliever Andrew Kittredge (neck tightness) had a long toss session and threw at 60 feet on level ground.