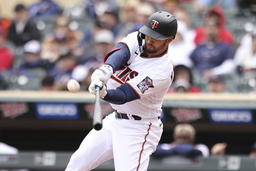 MINNEAPOLIS (AP) Ty France had three hits and drove in two runs, including a go-ahead single in the ninth inning that lifted the Seattle Mariners over the Minnesota Twins 4-3 on Saturday.

Byron Buxton had given the Twins a 3-2 lead with a two-run homer in eighth against Andres Munoz (1-0), who got his first big league decision since 2019 with San Diego.

Julio Rodriguez, a 21-year-old rookie, doubled opening the ninth off Tyler Duffey (0-1) for his first major league hit. He scored on a double by Adam Frazier, who came around on France's single.

Diego Castillo struck out two in a perfecr ninth for his first save, and the Mariners opened the season with back-to-back wins for the first time since 2019.

Duffey allowed two runs and three hits in the first save opportunity for Minnesota since Taylor Rogers was traded to San Diego earlier in the week.

Luis Arraez homered for the Twins on his 25th birthday, his first this season.

Nick Gordon walked to lead off the eighth against Munoz, snapping a string of 16 straight batters retired by Mariners pitching. Buxton's homer, his first since signing a $100 million, seven-year contract, reached the third deck in left field. He turned to the dugout, flipped his bat and yelled in excitement.

Tom Murphy homered for Seattle off of Sonny Gray, who alloed two runs and four hits in 4 2/3 innings in his first start since he was obtained from Cincinnati last month. He struck out four and walked two.

Mariners: Abraham Toro started Saturday at third base for Eugenio Suarez. Seattle manager Scott Servais said he had the lineup prepared for the first two games before even arriving in Minnesota in order to give more players a chance to play early in the season.

Twins: Nick Gordon made his season debut in left field. Gordon came out well from a nasty outfield collision with Max Kepler in the second to last game of spring training.