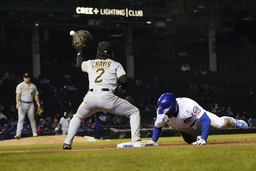 CHICAGO (AP) Roberto Perez drove in three runs, Michael Chavis broke a tie with a home run in the fourth inning, and the Pittsburgh Pirates beat the Chicago Cubs 4-2 on Friday night.

The Cubs were held scoreless over the final seven innings by Pirates left-hander Jose Quintana and four relievers in a game that started nearly six hours late because of forecasted inclement weather.

Perez hit a two-run single in the second to snap a streak of 10 2/3 scoreless innings by Cubs left-hander Drew Smyly (1-1) to start the season. Perez led off the fifth with his first homer of the season to extend the Pirates' lead.

"Roberto not only caught well, he did a nice job swinging the bat," Pirates manager Derek Shelton said of Perez, who after going hitless in his previous 10 at-bats has three hits in his last six plate appearances.

Michael Hermosillo snapped an 0-for-12 slump to start the season by hitting a two-run double in the second to account for the Cubs' scoring.

Two batters earlier, Quintana was struck on the left leg by a line drive by Jonathan Villar but stayed in the game. Quintana, who pitched for the Cubs from 2017-20, pitched 4 2/3 innings, striking out three, walking three and giving up three hits.

Pirates relievers have held the Cubs scoreless over 10 1/3 innings in the first two games of this four-game series. Chicago's Nick Madrigal grounded to second with the tying run at first to give Chris Stratton his second save in as many nights. Chase De Jong (1-0) pitched two scoreless innings for the win.

Seiya Suzuki snapped an 0-for-10 rut with a single to start the eighth, but reliever David Bednar struck out the next three batters.

"I'm not trying to shy from anybody," Thompson said. "I try to let them put it in play, let the defense work and try to work ahead quick."

CUBS: OF Clint Frazier was placed on the 10-day injured list due to an appendicitis. OF Alfonso Rivas was recalled from Triple-A Iowa. . RHP Alec Mills (lower back strain) will make a rehab start Saturday at Iowa. . LHP Wade Miley (elbow soreness) threw a bullpen session Friday.

Pirates RHP Zach Thompson (0-1, 9.00) will face the Cubs on Saturday. Thompson allowed six runs in four innings Monday night in a 6-1 loss to the Brewers.