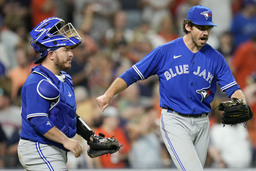 Chapman's tiebreaking drive into the left-center field gap off reliever Hector Neris (1-1) scored Guerrero from first base. Houston lost its third in a row.

"I wasn't really trying to do too much, I just really wanted to extend the inning, get Vladdy into scoring position and just keep the inning going," Chapman said. "Get the next guy up. Luckily, I was able to find that gap, and Vladdy was on his horse, so it was nice to get that run."

The Astros put runners at the corners with one out in the bottom of the ninth on singles by Yuli Gurriel and Aledmys Diaz off Jordan Romano.

After Jason Castro struck out, J.J. Matijevic was sent to the plate for his major league debut, pinch-hitting for Martin Maldonado. The lefty vs. righty matchup didn't work out for the Astros when Romano fanned Matijevic for his eighth save.

"First and third, but he doesn't panic," Blue Jays manager Charlie Montoyo said of Romano. "He was throwing 97-98 (mph) today. He's been lights out. I've got to keep talking about him because it's not easy to do what he's doing. But again, pitching and defense won this game."

Justin Verlander made his first start against the Blue Jays since no-hitting them on Sept. 1, 2019, in Toronto. On Friday night, he held Toronto hitless until Raimel Tapia singled to right in the fourth inning.

Verlander went six innings and allowed three runs on four hits. He struck out five and walked one.

"My stuff was not as sharp as I'd like, just a little loose," Verlander said. "But you don't have your best stuff every time out."

The Astros took a 3-0 lead in the third on a one-out double by Maldonado that was followed by a walk to Jeremy Pena and singles from Michael Brantley, Alex Bregman and Gurriel.

"Early in the game, we didn't have many good at-bats, but then the second go-around, the at-bats got better, and they took him out of there before we did more damage," Astros manager Dusty Baker said.

The Blue Jays tied it at 3 in the fifth on back-to-back homers from Santiago Espinal and Bradley Zimmer. The solo shots -- both to left field -- came on consecutive pitches and marked the first homers of the year for both Espinal and Zimmer.

Toronto scored its first run in the fourth after Tapia led off the inning with a single and later scored on a grounder.

"I'm so happy, I'm smiling," Montoyo said. "Not only because we're winning, but we're playing good defense and we're pitching and that's how you're going to win. Of course, everybody talks about our hitting, but as you guys know, it's tough to hit. But if we keep doing what we're doing, I feel good about this team."

Blue Jays: OF George Springer was out of the lineup after being hit in the right wrist on Thursday. Springer said before the game he is hopeful to play on Saturday night. It's his first trip back to Houston, where he spent seven seasons before signing with Toronto in 2021.

Astros: Reliever Ryan Pressly (knee) ran on Friday, which Baker called a "positive sign" and said he will probably face hitters as early as Sunday, and the team will make an evaluation from there.

GOLD GLOVES ALL AROUND

Astros 1B Gurriel was presented his 2021 Gold Glove Award in a pregame ceremony. Additionally, the Astros received a team Gold Glove as the best defensive team in the American League last season.

The Astros honored Maldonado with a pregame video tribute on the 10th anniversary of the catcher's major league debut.

"It's never an easy at-bat, but I'm always up for the task. I definitely didn't see eight off-speed pitches coming my first at-bat. It threw me off. But that's the thing with him, he's unpredictable and he's got a bunch of really good pitches."

Blue Jays: Alek Manoah (2-0, 1.50) starts for Toronto on Saturday. He has pitched into the sixth inning in seven straight starts, giving up two runs or fewer in the last six.