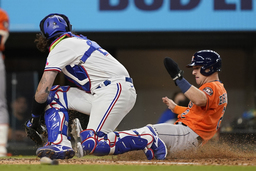 ARLINGTON, Texas (AP) Jake Odorizzi allowed one hit over six innings to end a long winless drought, and a rejuvenated Kyle Tucker homered and drove in three runs to power the Houston Astros past the Texas Rangers 5-1 on Tuesday night.

Odorizzi (1-2) permitted just two baserunners and won for the first time in 10 starts since last August. He entered with a 9.00 ERA and had given up 16 hits in nine innings during his first three starts this season.

In his previous start against the Angels, Odorizzi walked four, gave up six runs and didn't get out of the first inning.

"The last outing was a little rough," Astros manager Dusty Baker said, "so it's good to see him smile after the game."

"It's nice to have guys back you. They really showed confidence," he said.

"I got tired of pitching like crap. I was attacking more swings. A lot of work went into the start. I thought my fastball execution was (good) today, and the up/down and then my cutter off of that was pretty good."

The lone hit off Odorizzi was a home run by Adolis Garcia in the second. The right-hander threw only 78 pitches, setting down the Rangers on just eight in the first inning.

"Our job as starting pitchers is to get deep," Odorizzi said. "That just shows your stuff is good that day. It's a much-needed outing for me."

Garcia helped the Astros to their first run in the second when he misjudged a line drive by Yordan Alvarez that went over his head in center field for a double. Alvarez advanced on a wild pitch and scored on Jeremy Pena's single.

In the bottom half, Garcia made up for the misplay with a drive over the left-field fence to tie it. Eight of his 34 career homers in 190 games have come in 19 games against Houston.

In addition to Garcia's homer, Kole Calhoun, Marcus Semien and Garcia again hit the ball to the warning track for the Rangers.

"An out's an out," Baker said. "We can't think about what could have happened if the ball had gone 10 more feet."

"As long as it stays in," he said. "I'm not the architect that built this place; I just work here. Just pitch to a ballpark. I spent a lot of time in the Central; the Tigers' place was just like this. You can give up 415-foot fly balls that are outs."

Houston scored three runs in the fourth to break open a 1-all game. The Astros won their first replay review of the season as they took a 4-1 lead against starter Taylor Hearn (0-2).

Singles by Alex Bregman and Alvarez put runners on first and third. Bregman scored on what was first ruled a double-play grounder, but the replay review showed Yuli Gurriel beat the throw at first. That became even more beneficial for Houston when Tucker followed with a two-run homer.

"That was a hustle play for (Gurriel). That was big because it kept the pitcher in the stretch," Baker said.

Tucker drove in another run with a grounder in the sixth.

"Sooner or later, we knew he was gonna hit," Baker said. "The guy can hit. He started out slow last year, too. He's probably more worried about himself than we were."

Astros: 2B Jose Altuve (strained left hamstring) "did everything baseball-related that you could do," Baker said. "He hit, he ran. (Wednesday) he's going to do some more. We'll see how he comes out of that." ... Alvarez was the designated hitter. Baker said the Astros want to keep him off Globe Life Field's artificial turf after he fouled a ball off his right shin Monday. Baker indicated that Alvarez would return to the outfield on Wednesday.

The Astros designated RHP Pedro Baez for assignment and recalled RHP Seth Martinez. In the second year of a two-year contract, Baez was 0-0 with an 11.57 ERA in 2 1/3 innings. Martinez, who made his major league debut with three games last September, was 1-1 with a 5.40 ERA in six relief appearances for Triple-A Sugar Land.

Rangers: Texas will send out RHP Glenn Otto (1-0, 1.80) against Houston for his second major league start this season.