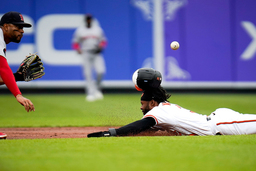 Anthony Santander had three RBIs for the Orioles, who took two of three from Boston. The Red Sox went 3-7 on a swing through Tampa Bay, Toronto and Baltimore to drop within a half-game of the last-place Orioles in the AL East.

"Tough road trip. They know it," Boston manager Alex Cora said. "There's no rah-rah speeches here. Everyone knows our record, everybody knows what we've been through. But like I've been saying, it's not that far from turning it around.

"We're close, but at the end of the day, you get paid to win games. We haven't done that so far this season."

Lyles (2-2) allowed one run and seven hits, striking out six, walking three and hitting a batter. The right-hander needed 101 pitches to get through the sixth, working out of several predicaments along the way.

"For the most part, I'm pretty satisfied with six innings," Lyles said. "A couple long at-bats to start the game, a couple of innings where there were multiple guys on base, a couple to jams to get out of. But overall, six innings of one-run ball (is OK)."

Red Sox starter Nick Pivetta (0-4) blanked the Orioles until the fifth, when they pounded the righty and two relievers for five hits and three runs. Boston is 1-11 in Pivetta's last 12 starts with seven straight defeats.

Odor's first homer with the Orioles made it 4-1 shortly before a rain delay of 2 hours, 5 minutes. After play resumed, Jorge Mateo doubled in two runs, Santander added a two-run single and Ryan Mountcastle singled in a run for a 9-1 lead.

Boston cleanup hitter J.D. Martinez, back after a three-game absence with a groin injury, delivered a grand slam off Travis Lakins in the ninth.

The Red Sox had five hits, three walks and a hit batter over the first four innings - but did not score. They stranded eight runners during that span, including three at third base.

Cora summed up Lyles' performance succinctly, noting, "He made some pitches when he had to."

Boston finally broke through in the fifth. Xander Bogaerts led off with a double, advanced on a groundout and scored on a fly ball by Frenchy Cordero.

Baltimore batted around in the bottom half. Tyler Nevin hit a two-run single and Santander added a sacrifice fly on a deep fly ball to left field with the bases loaded. The drive would have been a grand slam a year ago, before the fence in left at Camden Yards was moved back 26 1/2 feet.

With the game out of hand and his bullpen depleted, Cora called upon catcher Kevin Plawecki to pitch the eighth inning. He gave up an infield hit before getting three straight outs.

Cora rested two of his struggling stars, Alex Verdugo and Bobby Dalbec, with the hope that two straight days off (Boston does not play Monday) will help them get back on track.

Speaking about Dalbec, Cora said: "Mentally, it's a grind. For how bad he looks, you have to keep everything in perspective. It's X amount of games. We want him to get going and I know he wants to get going, but it's a process. We need him to breathe a little bit, relax."

The same can be said for just about the entire team. Boston batted .225 in April and went 9-13. "We've got a lot of guys scuffling right now," Cora acknowledged.

Orioles: Trey Mancini (bruised ribs) did not start but was available off the bench. ... LHP Alexander Wells has a Grade 1 UCL (elbow) strain and will miss 8-12 weeks, manager Brandon Hyde said.

Red Sox: After getting their first day off since April 14, the Red Sox return to action Tuesday against the Los Angeles Angels at Fenway Park.

Orioles: RHP Tyler Wells (0-2, 5.554 ERA) faces the visiting Minnesota Twins on Monday night in the opener of a four-game series.