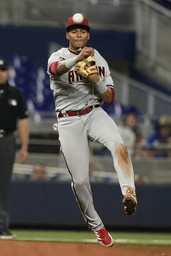 Pavin Smith also homered and Ketel Marte drove in two runs for the Diamondbacks, who have won six of eight.

The Marlins lost their second straight after a seven-game winning streak.

For the second consecutive night, Miami rallied from a 5-0 deficit with four runs in the seventh inning.

The Marlins loaded the bases with two out against Arizona reliever Luis Frias. Jazz Chisholm Jr. hit a hard smash past first base that umpire Ryan Wills originally ruled foul. But a video review overturned the call and Chisholm was credited with a ground rule double, scoring Garrett Cooper and Brian Anderson.

Diamondbacks manager Torey Lovullo argued the reversal and was ejected.

"In the intensity of the moment, I said some things that got me ejected," Lovullo said. "I wasn't satisfied with some of the things they were telling me. They told me that the umpire just made a mistake, turned around and was going to signal fair but called it foul. It seemed like his body was in the right spot, was in control."

Lovullo added, "It's not a reviewable play, but a crew chief review."

Keynan Middleton pitched a perfect eighth and Joe Mantiply closed it out for his second save.

"It felt like the same game," Miami manager Don Mattingly said. "We fell behind, couldn't get any kind of traction. All of a sudden, we put some runs on the board."

Leadoff homers from Walker and Smith in the second and third gave Arizona a 2-0 lead. Both shots off Rogers came on first pitches.

"For me, it was just trying to get a fastball, I had a feeling he was going to come early," Walker said. "He put a good heater and I got the barrel to it."

Walker's double originally was scored a fielding error by third baseman Anderson before it was reversed.

"That threw me for a loop a little bit," Walker said. "But I just felt, the nature of the play, infield in, hit it hard enough, that's definitely not a routine play for an infielder. I felt it was a hit, I'm glad it ended up getting switched back."

Castellanos, who's previous outing lasted two innings and five runs, retired the first nine before allowing consecutive singles to Chisholm and Aguilar in the fourth. But Miami didn't break through after Jorge Soler grounded out, Jesus Sanchez popped out to third and Cooper grounded out.

"I'm a man who forgets quickly," Castellanos said. "I went inning by inning. That's what kept me in the game."

The start of Arizona's season has not been kind to Walker. The offensive outburst on Tuesday was Walker's first multi-hit performance of the season. He began the day hitting .148 and was 2 for 17 on the team's current road trip.

"There's a lot of pressure getting off to a good start every year," Walker said. "It's great to see us settling in and bounce back."

LHP Madison Bumgarner (1-1, 1.17) will pitch the series finale for the Diamondbacks on Wednesday afternoon. The Marlins will start RHP Elieser Hernandez (2-1, 5.75).