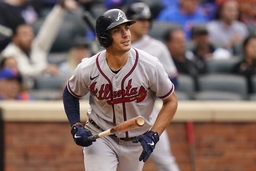 NEW YORK (AP) Pete Alonso had two RBI singles as the Mets pounced early against Charlie Morton, and New York's bullpen closed out a five-hitter to beat the Atlanta Braves 5-4 Tuesday in the opener of a doubleheader.

Four of the Mets' first five batters reached against Morton, with the Mets taking a 2-0 lead on RBI singles by Alonso and Eduardo Escobar. Alonso added another run-scoring single during New York's two-run second inning.

Matt Olson hit a three-run homer in the fifth against starter David Peterson, his third of the season, to pull Atlanta within 5-4. The drive came one pitch after Peterson made his first career error when he whiffed on Ozzie Albies' potential double-play grounder.

Peterson (1-0) stumbled during a three-run fifth but was otherwise sharp after being recalled Tuesday from Triple-A. The left-hander was charged with four runs - three earned - and four hits with six strikeouts and three walks.

Adam Ottavino struck out two in a perfect sixth and Drew Smith turned in two hitless innings to deliver a one-run lead to closer Edwin Diaz.

Diaz struck out two and worked around a single in the ninth for his fifth save.

Atlanta star Ronald Acuna Jr. did not play in the opener as the Braves ease him back into action after he missed nearly a year with a torn ACL in his right knee. Acuna remained on the bench in the ninth even as Atlanta brought up the bottom of its batting order down a run.

Acuna batted leadoff and played right field in the nightcap.

"It's a good start, but it's barely May," Smith said. "It's a long season. Just have to stay focused and keep going one at a time"

Travis Jankowski had two hits, a walk and scored three runs from the leadoff spot for New York. He reached on a fielder's choice in the fourth, stole second, took third on an overthrow and scored on Mark Canha's sacrifice fly.

"He's as excited as a guy going to his first game in Little League, playing today and leading off," manager Buck Showalter said. "He brings some tools that we need.

The Braves appeared to benefit from an umpiring blunder in the second. Adam Duvall advanced to third on Dansby Swanson's double down the left-field line, then scored a batter later on Travis Demeritte's sacrifice fly. Replays showed Swanson's hard grounder bounced just outside the third-base bag, but it was not reviewable because third base umpire Chad Fairchild made the judgment call with the play in front of him.

Fairchild was behind the plate Monday, when he acknowledged to Mets pitcher Chris Bassitt that he missed a strike call in the fifth inning.

New York right-hander Carlos Carrasco (1-1, 4.5) is set to start the second game against Atlanta right-hander Kyle Wright (3-0, 1.13), who has 34 strikeouts and six walks over 24 innings this season and has yet to allow a homer.

Mets reliever Yoan Lopez has appealed his three-game suspension for throwing several pitches inside during the ninth inning against Philadelphia on Sunday after a teammate was plunked.

Lopez was sent to Triple-A hours before the ban was announced Monday, and he can't serve his punishment until he's recalled. His dilemma: the Mets are unlikely to call up a pitcher whose roster spot would immediately be lost to a ban, possibly leaving Lopez stuck in Triple-A.

Mets shortstop Francisco Lindor said he planned to speak with the union about Lopez's plight. Lindor is on the union's executive subcommittee.

Braves: RHP William Woods was called up as the team's 27th man for the doubleheader.

Mets: RHP Trevor May was placed on the 15-day injured list with right triceps inflammation. RHP Adonis Medina was recalled from Triple-A.