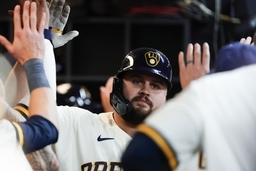 Tellez homered twice and set a Milwaukee Brewers record with eight RBIs to extend his recent power surge in an 18-4 blowout of the reeling Reds on Wednesday night. He has homered four times in his last four games to increase his season total to seven.

"It's just putting together consistent at-bats, hitting the ball hard, getting myself in leverage counts and, when you get to two strikes, not panicking," Tellez said.

The woeful Reds (3-21) have dropped eight straight and 19 of 20. The only other National League team to lose at least 21 of its first 24 games was the 1894 Washington Senators, according to STATS.

Cincinnati has also dropped its last 12 road games. It marks the first time since 1945 that the Reds have endured 12 consecutive road losses within the same season.

Reds manager David Bell tried to focus on positives after the game by praising the way his players have approached the early slump.

"It's not easy," Bell said. "There's no question. We all know that. It's a huge challenge that we have in front of us."

Tellez broke a 2-all tie and put the Brewers ahead for good with a 453-foot grand slam to right-center off Vladimir Gutierrez (0-5) in the third inning. The burly first baseman had a two-run shot off Dauri Moreta that traveled 431 feet in the sixth.

He capped his big night with a two-run double off the right-field wall in the eighth against Matt Reynolds, an infielder who came in to pitch after the game got out of hand.

"We are getting him up there with tons of men on base, and he's putting some balls in the seats," Brewers manager Craig Counsell said.

Tellez is making the most of an opportunity he's never had before in the majors. He already has 75 at-bats this season and is on pace to shatter his career high of 370.

"It's nice being in a situation where I have the opportunity to play pretty much every day and have an organization and manager and staff that believes in me, that I can play every day on both sides of the ball," Tellez said. "I think that's very comforting for a player."

Kolten Wong also homered for the Brewers. Andrew McCutchen went 4 for 5, scored twice and had four RBIs. Christian Yelich was 2 for 4 with three runs and two RBIs.

The 18 runs were the most the Brewers have ever scored against the Reds. It was the 12th time in franchise history Milwaukee scored at least 18 in a game.

Cincinnati's troubles started before the game when outfielders Tyler Naquin and Nick Senzel were removed from the starting lineup and placed on the injured list with no injury designation, an indication both are sidelined with COVID-19-related issues. Star first baseman Joey Votto went on the COVID-19 injured list Tuesday.

"It was a tough day, losing a couple of players right before we went out on the field," Bell said. "This team just continues to fight through it. It's not easy, but it's impressive. They continue to play, continue to try to figure it out every day. That's all we can do. There's no question it's going to pay off."

Gutierrez entered with a 3-0 career record and 2.37 ERA against the Brewers, but he wasn't nearly as effective this time. He allowed eight hits and seven runs in 4 1/3 innings while also hitting two batters with pitches and committing two errors.

Milwaukee poured it on with two runs in the sixth, four in the seventh and five in the eighth.

Cincinnati's bullpen struggled so much that the Reds turned to Reynolds to get the final out in the eighth after Lucas Sims walked Jace Peterson on four pitches with the bases loaded. Reynolds allowed an RBI single to McCutchen and Tellez's two-run double before retiring Tyrone Taylor.

Dugger, 26, pitched in one game for Tampa Bay this season, allowing three runs and eight hits in 5 1/3 innings.

Reds: RHP Luis Castillo is expected to make his season debut Monday against the Pittsburgh Pirates. Castillo, who has been recovering from a right shoulder strain, struck out seven and allowed three hits over 4 1/3 shutout innings for Triple-A Louisville on Wednesday in his third rehabilitation appearance. . Bell said it would likely be "more than a couple of days" before Votto plays again.

The three-game series concludes Wednesday afternoon with Hunter Greene (1-3, 6.00 ERA) pitching for the Reds and Adrian Houser (2-2, 2.53) starting for the Brewers.