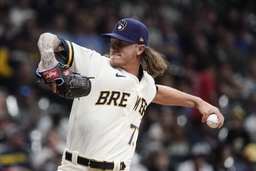 Peralta (3-1) gave up two hits and a walk while striking out 10 and retiring his final 11 batters. It was the sixth time in Peralta's career that he struck out 10 or more batters. Brewers starters have seven outings with 10 or more strikeouts this season, the most in the majors.

"Freddy was great tonight. He got locked in and for seven innings, he was just even and smooth and didn't get into trouble," Brewers manager Craig Counsell said.

Peralta recorded his 500th career strikeout in the seventh when he retired Marcell Ozuna on a called third strike.

"My confidence, of course, is getting way better," Peralta said. "Everything was working really good."

The Brewers improved to 11-4 at home, the best mark in the National League.

Atlanta starter Ian Anderson (3-2) shut out Milwaukee through five innings before the Brewers broke through in the sixth. Renfroe doubled with one out and moved to third on Omar Narvaez's groundout. Renfroe then scored on Anderson's wild pitch.

Devin Williams struck out the side in the eighth and closer Josh Hader did the same in the ninth for his 14th save in 14 appearances this season. Hader has converted 28 consecutive save opportunities dating back to last season.

"Peralta was just spot on. His stuff is good," Braves manager Brian Snitker said. "The other two guys, Williams and Hader, are as good as it gets. You know you are going to get good pitching the whole series when you come in here and play these guys."

Anderson allowed four hits and one run in six innings. He walked two and struck out three.

"I feel like I was throwing the ball well. The velocity was good again," Anderson said. "I wish I could get that pitch back."

Braves: OF Ronald Acuna Jr. (sore groin) missed his fifth consecutive game but took part in baserunning drills prior to the game. "He checked out really good. They ran him pretty good around the bases," Snitker said. "We'll see how he is tomorrow. It was very encouraging." Acuna could return to the lineup Tuesday. ... Snitker announced after the game that LHP Tyler Matzek would be placed on the IL with shoulder inflammation.

Brewers: 3B Willy Adames sat out after exiting Sunday's game with a left ankle sprain. He was set to be evaluated by doctors. Adames, who is tied for the team lead in home runs with nine, could land on the IL. ... Placed RHP Jandel Gustave on the 15-day injured list, retroactive to May 15, with a strained right hamstring. ... Reinstated LHP Brent Suter from the paternity list. ... OF Andrew McCutchen, who has been on the COVID-19 IL since May 7, announced on social media during the game that he has been cleared to return.

Suter returned to the team after the birth of his second son, Layton Lee. While away, Suter and his father, Mike, played catch in the yard of Suter's home so he could stay sharp without making a trip to the ballpark.

"I got some pretty good intensity in it," Suter said. "He's pretty good at catching it. I did spike a slider on him, accidentally."

With the game-time temperature at 75 degrees, the retractable roof at American Family Field was open for the first time this season.

Braves: Tucker Davidson will be recalled from Triple-A Gwinnett to start Tuesday's game. Davidson made one relief appearance for Atlanta earlier this season.