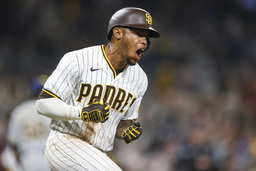 SAN DIEGO (AP) Veteran manager Bob Melvin had faith in Jose Azocar with the bases loaded and two outs in the 10th inning, and the rookie delivered.

Azocar lined a single into center field to bring in Manny Machado and lift the San Diego Padres to a 3-2 win against the NL Central-leading Milwaukee Brewers on Monday night for their fifth straight victory.

Azocar entered as a pinch-runner for Luke Voit in the seventh and then stayed in the designated hitter. He singled leading off the ninth, which is why Melvin knew he could trust Azocar with another at-bat.

"I'm thrilled for him," Melvin said. "It's a decision, too. He hasn't been up in spots like that before. His first at-bat had a lot to do with getting that second at-bat. A guy like Austin Nola is a guy I'm thinking about as well, who you know is going to probably put it in play and has an idea."

But Melvin stuck with Azocar, a 26-year-old from Venezuela because of "the at-bat he had before and he looked pretty calm up there. Really thrilled for him. This is a kid who really worked hard for us and has come a long way. I'm sure his phone is probably blowing up tonight and that's the biggest thrill of his major league career."

Azocar clapped his hands as he rounded first base and was soon mobbed by teammates.

"I feel amazing because I got the opportunity and I tried to do my best and I got the results," he said.

"I told the manager I was focused for the A-B so he gave me the opportunity to get in the box and do my thing," Azocar added. "That's what happens when you have a manager like that, they believe in you 100% so they give you the opportunity all the time."

Machado, the NL's hottest hitter, started the inning as the automatic runner on second base and advanced on Jurickson Profar's groundout. Miguel Sanchez (0-1) intentionally walked Eric Hosmer and Wil Myers to load the bases before Kim Ha-seong lined out to shortstop Luis Urias, a former Padres player. Azocar then lined a single to center to bring in Machado.

The Brewers loaded the bases with no outs in the 10th before Luis Garcia (3-2) got Andrew McCutchen to ground into a 1-2-3 double play. Rowdy Tellez then grounded out.

San Diego climbed out of a 2-0 deficit on Jorge Alfaro's RBI groundout in the fifth and Trent Grisham's RBI bunt single in the seventh that brought in Myers, who hit a leadoff double.

Tyrone Taylor hit a two-run double for Milwaukee off Nick Martinez in the second.

The Brewers threatened again in the fourth when they loaded the bases with no outs. But then Martinez retired the next three batters, including when shortstop Jake Cronenworth made a spectacular diving stop of Kolten Wong's grounder and threw him out to end the threat.

Cronenworth made another nice play in the sixth on Taylor's grounder to start an inning-ending double play.

Tennis great "Rocket" Rod Laver and former Los Angeles Dodgers and Padres star Steve Garvey were among the guests in the owner's box. Laver, the last man to win the calendar-year Grand Slam, has lived in northern San Diego County for several years. Garvey finished his career with the Padres. His walk-off homer in Game 4 of the 1984 NLCS remains one of the biggest hits in the history of the Padres, who clinched their first pennant the next day. The Padres retired his No. 6 on April 16, 1988.

Brewers: Placed RHP Freddy Peralta on the 15-day injured list with a right lat strain and closer Josh Hader on the family medical emergency list. Recalled RHP Trevor Kelley and RHP Miguel Sanchez from Triple-A Nashville. Manager Craig Counsell said Hader will miss the entire three-game series to be with his wife, who is expecting their first child. "Josh's wife has had complications with her pregnancy and they're at a stage where Josh did not feel comfortable leaving," Counsell said.