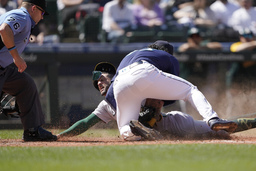 SEATTLE (AP) Less than two months into the season, the Seattle Mariners are quickly trending toward irrelevance in a season that started with expectations of ending the longest playoff drought in the major leagues.

Oakland took two of three in the series and leapfrogged the Mariners in the division standings. While it's still only 45 games into the season, Seattle (18-27) has lost eight of 10 and 21 of the past 28 games.

"We're not playing good baseball. We know that," Seattle manager Scott Servais said. "We have to make some adjustments here and it needs to happen quick."

Ray tied his season high with 10 strikeouts, but allowed a home run for the fifth straight start. Brown was the first to get to Ray with a solo shot in the fourth inning. Brown entered the day with one hit all season against left-handed pitchers, but doubled off Ray in his first at-bat and followed the next time up with his third home run.

"Seth and I talked about being aggressive against Robbie," Oakland manager Mark Kotsay said. "I felt Robbie was going to challenge him with fastballs and Seth put two good swings on two heaters."

Andrus added a two-run homer in the sixth, his first this season. Andrus hit a towering fly ball that off the bat appeared to be a standard fly out but didn't stop carrying until left-fielder Jesse Winker ran out of room at the wall.

Ray was annoyed that what appeared to be an out left the yard.

"That's a pop up. That's all I can say. I mean, it's just mind boggling," Ray said. "I can understand beating a guy and him getting a hit, but beat a guy and he takes you out of the yard is just super frustrating."

Ray (4-5) pitched out of trouble with key strikeouts in the second and fifth innings with runners at third base. He's struck out at least eight in four straight starts, but is the first Seattle pitcher this season with 10 home runs allowed.

"He got big outs. He kept us right there and that's all you can ask if you're starting pitcher," Servais said. "But offensively we just didn't get anything going today."

Oakland's Paul Blackburn kept up his strong start to the season despite control issues. Blackburn (5-0) allowed one hit over 5 1/3 innings before giving way to the Oakland bullpen. Blackburn's day was cut short due to walks, giving up a career-high five, but lowered his ERA to 1.70.

Dany Jimenez was the last of four relievers pitching the ninth to remain perfect in 10 save chances.

"Five walks is obviously unacceptable, but on the flip side of that, one hit," Blackburn said. "My stuff was was playing well today. Even though I walked five guys was able to still create soft contact and keep them from advancing runners, keeping them from scoring."

J.P. Crawford had Seattle's only hit off Blackburn with a single in the second inning. Luis Torrens had a two-out RBI single in the seventh inning that scored Dylan Moore, and Ty France singled and scored on Zach Jackson's wild pitch with two outs in the eighth.

Athletics: OF Ramon Laureano was set to make his return after getting hit on the hand last weekend against the Angles, but was a late scratch. Laureano was in the original starting lineup in right field but Oakland made a late switch and Barrera started in his place.

Kotsay said Laureano didn't feel ready after hitting in the cage pregame and decided he'd only be used in a pinch-hit role if needed late in the game.

Athletics: RHP Frankie Montas (2-4, 3.55) will start the opener of a four-game series in Texas. Montas left his last start after 1 2/3 innings after getting hit on the hand by a line drive. Montas has lost three straight decisions.

Mariners: After a day off, Seattle opens a three-game series with Houston on Friday. RHP Chris Flexen (1-6, 4.98) will start the opener. After pitching well but getting little run support to open the season, Flexen has struggled allowing 14 earned runs in his past three starts.